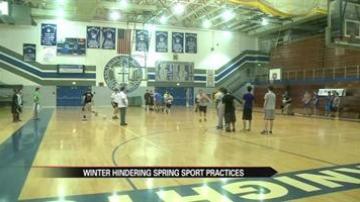 MISHAWAKA, Ind. -- Mother Nature has been blamed for many things this season- roofs collapsing, cars sliding, and even kids falling. Winter sports at local high schools haven't been affected, but now that they're starting to practice for spring sports - there's no place to go.

At Marian High School in Mishawaka the athletic director was forced to think up a creative practice schedule.

“Our gym is full, almost until 9:30 at night now because all the teams that could be outside are stacking up and trying to get some gym time,” says Marian High School Athletic Director Reggie Glon.

Outside piles of snow block anyone from even reaching the field. So practicing there isn’t an option.

And even beyond snow, the athletic director says a frozen field is nothing to play with.

“Lacrosse and softball and baseball and track have to have a certain temperature that they play and if you land on a frozen field you could really cause serious injury. So those are what our concerns are,” said Glon.

“It’s been affecting it pretty tremendously. Would love to be outside, being in a confined space here in the gym doesn’t do the team any justice," said Welch.

And with more than five teams sharing two gyms, they say it poses another challenge as well.

The athletic director says they are already looking to possibly rescheduling some early games because students haven’t been able to get outside and get quality practice in.