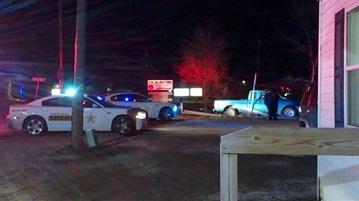 ELKHART COUNTY, Ind. -- The Elkhart County Sheriff’s Department says an Elkhart woman hit three vehicles, two fences and weaved across the road. A woman who witnessed the wild ride took a few pictures and gave a detailed account of what she says happened.

She called 911 and was on the phone for ten minutes plus before deputies arrived.

She detailed the driver’s every move as it happened.

Kauffman says the incident began when an out of control driver ran a stop sign coming to a stop in the middle of CR 9. She reversed and then proceeded north bound in the south bound lane. The she ran over a metal fence and slammed into a gold car that was in the front parking lot of Northside Repairables, Etc., where the witness  works.

"When she hit this car here, she pushed it a good 3 to 4 feet into the vehicle next to it,” said Kauffman.

It was damaged as well.

"I was on the phone with 911 and I told the operator that I am going to check on this woman she may need an ambulance,” said Kauffman.

When she approached the vehicle, Kauffman says the 47-year-old driver wasn't coherent or cooperating.

"The last thing she said was, ‘Leave me alone,’” said Kauffman.

She says the driver, identified by the Elkhart County Sheriff’s Department as 47-year-old Rashelle Holley, reversed her blue Ford Ranger, with a young teen in the vehicle, and caused more damage.

"Came back out onto the road and hit a van, backed up and did a couple more back-and-forths and then ended up over there, hits a post, a tree and a fence,” said Kauffman.

The driver finally came to a stop near County Road 9 and Forest Hill Avenue when deputies arrived. They took the driver to the hospital for treatment where they said she had a broken nose.

"She was extremely intoxicated and she was enough that normal people would probably be dead,” said Kauffman.

We asked how she came to that conclusion.

“Based on the statement the officer made,” said Kauffman.

In between snapping pictures, Kauffman called her boss to come back to work.

"Considering the magnitude of what could have happened, it's not too bad,” said Andrew Gould, owner of Northside Repairables, Etc..

That was his assessment of the damage.

"Cars can be replaced,” said Gould.

He added that people cannot be replaced.

Investigators were back out to the scene on Thursday getting statements from all of the witnesses.

Kauffman says the officer told her that the woman who was driving had a BAC well over the legal limit.

The sheriff's department says the case has been forwarded to the prosecutor’s office. Kauffman says she's worried the woman isn't behind bars right now because she may try this stunt again and next time someone may get seriously hurt.