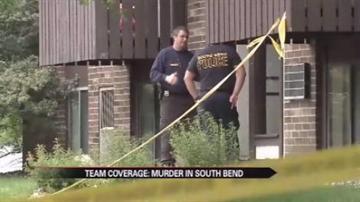 SOUTH BEND, Ind. – Residents who live in the Irish Hills apartments are shocked at what happened Sunday morning. A woman was stabbed, her daughter was stabbed and died and the suspect was killed by police.

“I heard some screaming but didn’t think anything of it,” said a neighbor.

“About five thirty in the morning, I heard screams.  The lady had blood and lacerations cut up and everything,” said a witness.

This witness says he could not believe his eyes when his neighbor ran outside with blood all over her afraid for her life and the life of her child.

He immediately called the cops and checked on the safety of the woman’s six-year-old daughter.
“I knocked on the window of the little girl’s bedroom and she was perfectly fine,” said the witness.

But during what the witness says was about eight minutes on the phone with police, the father stabbed his six-year-old daughter until police broke down his door.

“The police officer basically started kicking the door in and I heard two shots pop, pop,” said the witness.

Police told the father to stop stabbing his daughter, but he would not so they shot him twice killing him.  That is when police rushed the six-year-old to the hospital.

The mother was also taken to the hospital.

The little girl died at the hospital.

“It is so sad especially that little girl. She was just a baby,” said the neighbor.