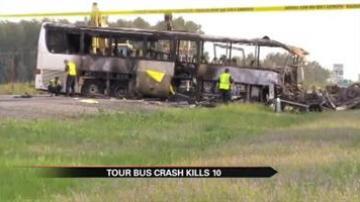 ORLAND, Calif. --- A couple whose car was clipped by a FedEx truck gave investigators new details that could help them understand what happened before it hit a passenger bus, killing ten people Thursday.

Authorities are still working to identify the bodies of those killed when the FedEx truck slammed head-on into the passenger bus.

Authorities say the FedEx truck clipped another car before hitting the bus.

The couple in the car, Bonnie Duran and Joe Duran, said they swerved just in time to avoid hitting the FedEx truck.

Bonnie said the FedEx truck coming toward her was already on fire before it ever hit the bus.

Authorities said this information could shed light on the crash investigation that's expected to take months.

"I looked over and saw the FedEx truck coming straight for me," Bonnie said.

"It was like a 3D movie, imagine a Mack truck coming out of a movie," Joe Duran said.

Investigators say it's unclear why the FedEx driver lost control.

At least ten people were killed in the crash.

More than 30 other people were injured.