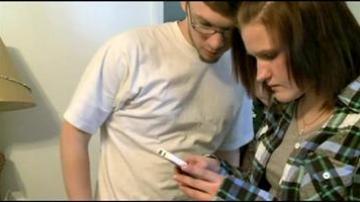 SOUTH BEND, Ind. -- New details are emerging as family and friends of Christopher White, the man killed at a house party on Sunday, respond to his death.

Ashley Harber threw the party at her house and says she just hopes other people can learn from this tragedy.

Harber, and her boyfriend Robert Ullery, just wanted to have some friends over.

But the party turned into a nightmare after midnight when White was shot to death.

He allegedly asked if anybody wanted to play Russian roulette.

Before Harber and Ullery knew it, Saye and White were in the basement playing a drinking game.

"They were playing beer pong, those two were playing and there was just a bang, and then Chris is on the floor and Jacob is saying he's going to jail," says Ullery.

Harber and Ullery believe they now have to say goodbye to one of their best friends because of one irresponsible decision.

"He was playing with the gun without it going off, and I think that lessoned his fear, or respect that you should have for a gun," says Ullery.

And now that's the message these friends want to get out, that a gun should be respected, no matter if the owner thinks it's loaded or not.