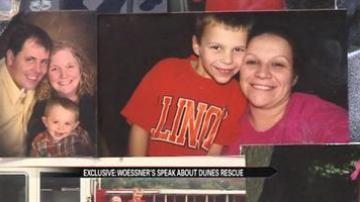 STERLING, Ill -- His miraculous rescue and survival story captured the entire nation. It seemed almost impossible that a 6-year-old boy could survive hours buried underneath feet of sand at Mount Baldy National Dunes in Michigan City.

ABC 57’s Kim Chappell went to Sterling, Illinois to talk to Nathan Woessner’s family about what happened on that Friday in July and hear for the first time in their own words what those terrifying moments on Mount Baldy were like.

“We give all the glory to god there because that was his miracle,” said Nathan's dad, Greg Woessner.

His mom says it was supposed to be a relaxing family vacation, but it turned out to be anything but.

“They went up to Mount Baldy and that is where it all began,” said Nathan's mother Faith Woessner.

That is where Nathan, his dad and two family friends went for an afternoon walk on the dunes and in a split second Nathan vanished.

Greg did not see Nathan fall, but his family friend, a 7-year-old named Collin did. He began screaming at Greg for help.

"If Collin hadn't seen him fall we never would have known to look for him, we would have never thought to look in a tiny hole like that,” said Faith.

Greg remembers it as almost a surreal moment of trying to figure out where his son went.

“Go back and run up upon a perfectly round hole, and you could hear Nathan in the hole,” said Greg. “We just are digging by hand we are trying to reach in and nothing, and calming him down and then the sides and everything collapsed in.”

The collapse brought panic because they knew Nathan might not be able to breathe.

That’s when Faith said she turned to prayer.

As Michigan City Firefighters, EMS and even local excavation companies rushed to Mount Baldy, the minutes turned into hours.

“Once we got down where we were 10 to 12 feet deep, he had been there two and half hours. It is almost impossible to believe he could be this far down,” said the Michigan City firefighter who helped find Nathan.

“You come to the realization that he might not make it out alive," said Greg.

They dug with machinery, with shovels and with their bare hands for four hours until finally, a firefighter found him.

“I turned white instantly, I walked over, took the probe, stuck it in that hole and said, ‘I found him he's right here,'" said the Michigan City Firefighter.

But dad knew the fight for his life was not over.

“When he came out he was a lifeless limp body,” said Greg.

It wasn't until the ambulance ride that Nathan showed any signs of life.

“He said he is alive! And for a mom those are the sweetest words I ever heard,” both the Woessner’s said.

We also talked to Nathan about the experience.

We asked him if it was dark and scary and Nathan nodded.

Then we asked him what happened when he found a hole, Nathan said, “I fell in it.”

Nathan remembers very little of those four long hours underground. But when we asked him if he had a fun trip, he said yes and that he wants to go back.

But the Woessner's can't go back to Mount Baldy and neither can any other visitors.

Ever since his incident on the dune in July, Mount Baldy remains closed as EPA investigators try to figure how this freak accident happened and how to make sure a walk on the beach doesn't turn into a near death experience for anyone else.

“Until they figure out what is going on, why are there holes, yeah I think they should be cautious. I would hate for that to happen to anyone else,” said Faith.

But that mysterious hole, brought about a miracle.

“You can't ask for a better story,” said the Michigan City Firefighter.

And for these parents, you could not ask for a better ending.

“There is no words that could say how grateful we are,” said Greg.

Faith added, “I think about them every day, and I pray for them every day and they have a real special place in our hearts. They are real heroes, they really are.”

The EPA investigation is still ongoing and sonar equipment did find one other hole in the sand. But the investigation was put on hold when the government shut down.