Woman calls 9-1-1 after getting stuck in donation bin 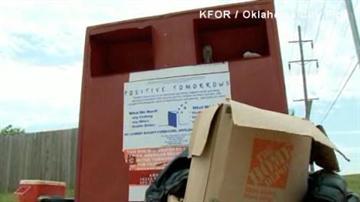 OKLAHOMA CITY – Firefighters in Oklahoma City made an unusual rescue after a woman got herself stuck in donation bin. The 9-1-1 calls detail her distress.

CALLER: Yeah, I am kind of in a particular situation. And I think I need some help.

Fire officials say it's their first rescue of the kind.

"We received a call from a lady that was actually stuck in a donation bin,” said Brian Stanaland, Oklahoma City Fire Chief.

She had dropped off three bags of clothes at the Positive Tomorrows donation box on Southeast 44th Saturday night.

She realized she had dropped a tennis bracelet inside - so came back at daybreak Sunday morning to try and get it back.

"I kind of presume that she got a little dehydrated. Apparently she was in there about two hours this morning. And even in the morning light hours, it would still be very hot, it was a metal bin,” said Chief Stanaland.

The woman told firefighters she stood on a table to hoist herself inside the bin.

She also said someone dropped off a donation while she was trapped inside.

CALLER: This lady stopped a while ago and I said excuse me, can you help me and I guess I scared her so bad she sped off because she was putting something in here.

Fire officials say they are aware of people climbing inside donation bins before - sometimes to steal items and even transients seeking shelter.

They say it's never a good idea - no matter the reason.

"Never climb inside of one of these bins, it's very dangerous,” said Stanaland.

CALLER: All right, thank you so very much.  God bless you.

The bracelet the woman was looking for belonged to her deceased mother. Sadly, she never found it.