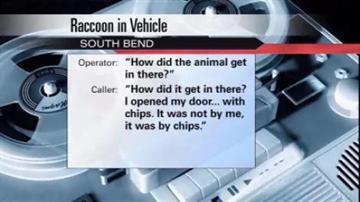 MISHAWAKA, Ind. -- A woman called 911 after luring an injured raccoon into her car. ABC57 has the 911 call and spoke to the St. Joseph County Humane Society about the incident.

OPERATOR: Is the raccoon inside your vehicle, like where the seats are?
CALLER: Yes. It's inside. All my doors are shut. I already opened the door, it won't come out.
OPERATOR: How did the animal get in there?
CALLER: How did it get in there? I opened my door. With chips…It was not by me, it was by chips.

The woman was trying to save an injured raccoon and lured it into her car using potato chips.

It then fell asleep on her front seat after eating all of the chips.

She called 911 after deciding she didn’t want it in her car any more.

When police arrived, they found the woman outside her vehicle with an injury to her hand that was bleeding.

The Humane Society was called in to remove the raccoon from the car.

The raccoon’s injuries were so severe, it had to be put down, according to the Humane Society.

Representatives with the Humane Society say it is never a good idea to try to rescue injured wildlife. You should call them so they can do it safely.