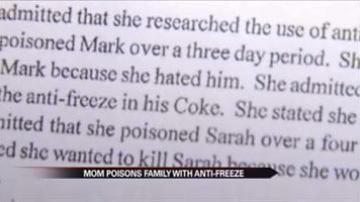 SPRINGFIELD, Mo. — A mother is charged with killing her husband, son and attempting to kill her own daughter. Police say she poisoned them with anti-freeze.

The 51-year-old initially denied any involvement.

But she later admitted to killing her husband she "hated him." And said her son was "worse than a pest."

Officers say she tried to killer her daughter because she had student loans and would not get a job.