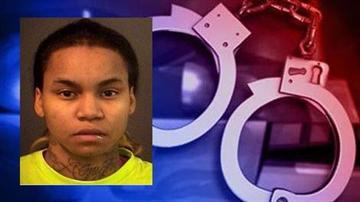 According to charging documents, Joilise Crossley is accused of shooting Tyrone Kelly during an argument.

She is also accused of shooting and injuring David Cross and Jerry Wright.

Cross told investigators Tyrone Kelly had a child with a woman who had recently become involved with Crossley.

Kelly was upset Crossley was spending time with his child. He and Crossley began arguing.

Cross said on March 26 he took Kelly to a home in the 1800 block of Johnson so Kelly and Crossley could end their feud.

At the home, Cross asked Crossley to come out of the house and she and several others came outside.

Instead of ending their feud, Cross said Kelly took a swing at Crossley and missed.

Cross said Crossley pulled out a gun and began shooting at Kelly. He was shot and fell to the ground.

Cross told police he was shot in the finger.

Crossley admitted to firing the weapon at Kelly, according to court documents. She said she only fired her weapon after others fired theirs.

Crossley faces one count of voluntary manslaughter and two counts of criminal recklessness.