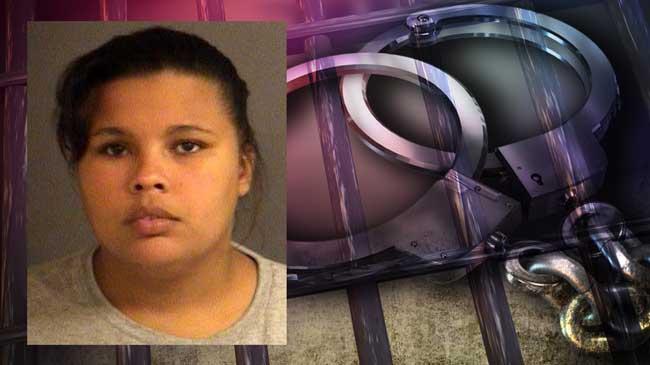 A woman was arrested after allegedly attempting to rob the Martin's Supermarket in Erskine Plaza on Saturday, according to court documents.

On November 12, Tiffany Stahl handed a note to a clerk that read, "Please be calm hun my son is involved. Give me all your 50s and 20s. Be careful! The guy OS knows your name…Jason Nelson," according to the probable cause affidavit.

The note was written with red ink.

After the clerk read the note, she hit the store "hold up alarm" and another employee called for security.

Another Martin's employee ran after Stahl and saw the side door to a blue minivan close. Moments later, Stahl got out of the van and began running towards a nearby restaurant.

Three people chased Stahl and finally detained her. She allegedly said, "Let me go and I will tell you what I did."

South Bend Police arrived and spoke with the suspect, employees of Martin's and the driver of the minivan.

The driver told police Stahl offered him $20 to drive her around while she ran errands. She asked him to take her to Martin's to pick up an insurance settlement wire transfer, reports said.

When Stahl came running out of the store and got into the minivan, she told the driver to go. He refused to drive away, reports said.

Stahl spoke with police and said a man she knew as Jason gave her the note and asked her to give it to his 'girlfriend' - one of the clerks. When she gave the clerk the note and they picked up the phone, she said she got scared and ran from the store.

She denied knowing the contents of the note, making any threats or attempting to rob the store.

Stahl told police they would find a red pen in her purse, but only because Jason had given her the pen at the time he gave her the note.

The video surveillance from Martin's revealed Stahl didn't speak with anyone prior to handing the note to the clerk, according to the probable cause affidavit.

Stahl has previously been convicted of robbery and completed her sentence on July 12, 2015.

Stahl is facing one count of attempted robbery.