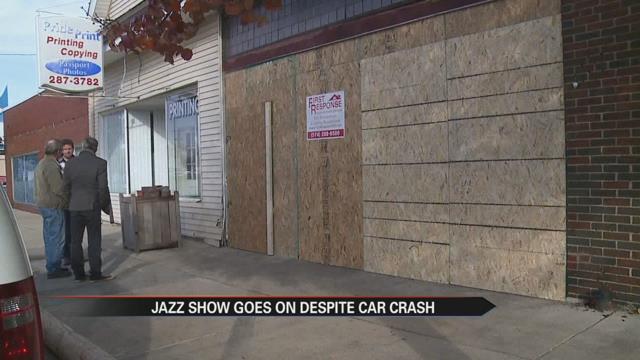 An early morning car crash into a South Bend Jazz hot spot didn’t stop the shop from reopening its doors that night.

The entrance to Merriman’s Playhouse was boarded up Tuesday night.

The owners say they’re lucky not much harm was done inside, and their main concern was on the well being of the driver who caused the damage.

“The human element is the most important part, this is just stuff,” said co-owner Stephen Merriman.

Stephen wasn’t singing the blues after a SUV crashed into his shop.

Instead, he was playing the blues over the speakers inside the building while he picked up the pieces.

“To get this far and crush this as much as they crushed this, there had to have been some impact,” said Merriman.

The impact with the building happened earlier Tuesday morning.

South Bend police arrived to Merriman's Playhouse to find a gray SUV implanted in the building.

“I was wondering what happened to the person?” said Merriman.

The person behind the wheel according to police was 25-year-old Samantha Clark.

She was booked in St. Joseph County Jail shortly after for driving under the influence.

Officers say she lost control and crashed into the front of the building as well as a light pole.

Clark was not seriously injured,

"It looks like the microphones, and the mixing board was right there, and miraculously seem to have escaped. But hopefully we won’t be interrupted, We're even going to try to do our open session tonight, starts about 8 p.m. so I've got a couple more tunings to do then I'll be back here trying to clean up. The show must go on,” said Stephen Merriman.