Woman donates kidney to boss, and then gets fired 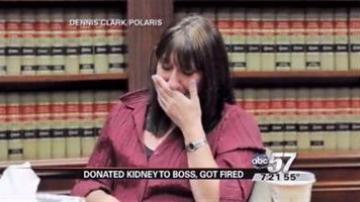 LONG ISLAND, N.J.-- Donate a kidney to your boss and get a pink slip?

That is exactly what happened to Debbie Stevens.

Stevens worked at the Atlantic Auto Group and decided to donate her kidney to her ailing boss.

Her boss was less than grateful.

After the surgeries Stevens said that she had complications, and called in sick a few times.

When she made it back to work, her boss belittled, embarrassed and yelled at her; ultimately firing her.

Stevens said, "You know, the crazy thing is that actually,I actually feel ashamed."

She now has a lawyer and is suing for an unspecified amount.