Woman fights off robber with broom 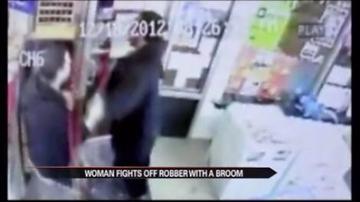 BROCKTON, Mass. -- One woman is being hailed a hero but she said she was just trying to protect her daughter.

Surveillance footage shows a robber in a white shirt coming in to her convenience store.  He was carrying a box cutter and demanding cash.

The store owner said he threatened that if she didn't give him the money he would "kill her baby" who she was holding at the time.

She fought back and went after the robber with a broom.

In the scuffle, a customer helped her but she was still injured.  She was slashed several times and has staples in her side.  She said she did her job as her baby remained unharmed.