Woman fired for being too attractive 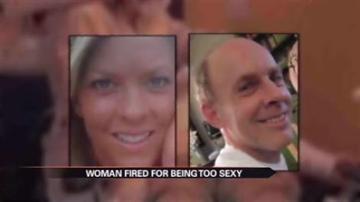 A dentist allegedly fired his long-time assistant because he says she was too attractive.

The 32-year-old worked for that dentist for 10 years as a hygienist. James Knight said he fired her because she was a threat to his marriage.

Melissa Nelson said her boss told her he was afraid he would try to start an affair with her.

Even more shocking, an Iowa supreme court ruled that employers can get rid of a their workers if there is "an irresistible attraction."

"After working so many years side by side I didn't have any idea that that would have crossed his mind," said Nelson, Plaintiff.  "I think it's sending a message that men can do whatever they want in the workforce."

Both are married with children.

She says she looked at him as a father figure until the last few months of her employment when he started complaining her clothes were too tight.