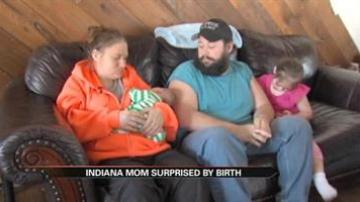 GREENCASTLE, Ind. -- An Indiana woman went into the hospital thinking she would leave without her appendix but instead she left with a new baby.

The mother of two was rushed to the hospital late last week when she started having severe stomach pains and that is when doctors told her she was nine months pregnant and in labor.

"She was in the yard, and they thought maybe she had a gall stone and then a few minutes later her water broke. We had no idea," said new father Josh Cox.

"I never showed. I had weight gain but it was my normal winter time weight gain so I was shocked," said Mandy Batchelor.

The couple's friends helped run out and get baby clothes and items because they had just given away all their baby things thinking they were done having kids.

Both mom and baby are healthy.