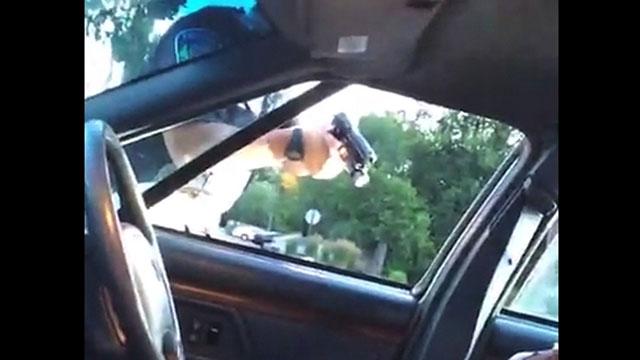 (CNN) -- As Philando Castile's head slumps backward while lies dying next to her, Diamond Reynolds looks directly into the camera and explains that a Minnesota police officer just shot her boyfriend four times. [Video embedded at the bottom of this story - warning - the video is graphic]

The nation is, by now, accustomed to grainy cell phone videos of officer-involved shootings, but this footage from Falcon Heights, outside Minneapolis, is something different, more visceral: a girlfriend live-streaming a shooting's aftermath with the police officer a few feet away, his gun still trained on her bloody boyfriend.

"He let the officer know that he had a firearm and he was reaching for his wallet and the officer just shot him in his arm," Reynolds said as she broadcast the Wednesday evening shooting on Facebook.

Castile had been pulled over for a busted taillight, Reynolds explained. He told the officer he was armed and had a concealed carry permit, she said. Her daughter, 4, is in the back seat.

As she speaks, Castile's wrists are crossed. Blood covers the bottom of his white T-shirt sleeve and a large area around his sternum and left rib cage. Perhaps in shock or agony, he peers emptily upward.

'You shot four bullets into him, sir'

Though you can't see the St. Anthony police officer's face, you can hear the agitation in his voice as he tells Reynolds to keep her hands where he can see them.

Composed, as she remains through much of the video, Reynolds replies, "I will, sir, no worries. I will."

The officer still sounds distressed as he explains, "I told him not to reach for it. I told him to get his hand off it."

Moments later, Reynolds pleads with God and then the officer as she realizes Castile won't likely make it.

She continues pleading outside the car as officers approach her with guns drawn. One orders her to her knees, and the phone begin filming the sky,

"Please Jesus, no. Please no. Please no, don't let him be gone," she says before officers place Reynolds and her daughter in the back of the police car.

Later, at Hennepin County Medical Center, her fears were confirmed: Her 32-year-old boyfriend was gone.

"We all know my nephew was a good kid, and we want justice as well as relief," he said.

The images of his nephew dying were the "most horrific thing I've ever seen in my life," Castile said Thursday morning on CNN's "New Day."

He and Valerie Castile, Philando's mother, stressed on "New Day" that Philando was law-abiding and a good person, and they expressed bitterness over the actions of the police.

"He's not an officer," Clarence Castille said. "He's just a man. An officer is supposed to protect and serve. That was a man who did that. That man is a destroyer, and he came into our lives and (has) done something and took something from us."

'Black in the wrong place'

Castile said that Philando was a kitchen supervisor for the St. Paul School District. The last time the two spoke was in May. They talked about setting up a nest egg for Philando's eventual retirement.

"My nephew has a (concealed carry) permit, and still got killed for carrying a gun. ... This needs to stop. This happens so often."

Valerie Castile said "they took a very good person" and wondered whether he was simply "black in the wrong place."

"Everybody that knows my son knows that he is a laid back, quiet individual that works hard every day, pays taxes and comes home and plays video games. That's it," she said. "He's not a gang banger. He's not a thug. He's very respectable. And I know he didn't antagonize that officer in any way to make him feel like his life was threatened."

She said she stressed to her son that if he ever had an encounter with police, he should "comply, comply, comply."

She said that when he got to a hospital to see her son, he was already dead and "they didn't let me see my son's body."

The mother said she hears people saying that police no longer racially profile people. She disagrees.

"We're ... hunted every day. It's a sign of war against African-American people as a whole," she said.

Sgt. Jon Mangseth, the interim chief of the St. Anthony Police Department, said there were two officers present when the shooting occurred -- a primary officer responded, who he believes has more than five years of experience, and there was also a backup officer. Having both is standard procedure for the department, which has jurisdiction over Falcon Heights.

One officer has been placed on standard paid administrative leave, Mangseth said at a short news conference early Thursday. No police were injured.

Mangseth said he hadn't seen the video, but he knows about it. The nearly 10-minute video garnered more than 1 million views before it was pulled from Facebook. It was then re-released on the social media platform with a graphic warning.

The Minnesota Bureau of Criminal Apprehension Assistance was called and is investigating the incident, Mangseth said.

"We will release the information as we learn it, and we will address concerns as we are faced with them," he said.

Mangseth told reporters that it's the first officer-involved shooting in the area in more than 30 years.

"It's shocking," he said. "It's not something that occurs in this area often."

The shooting comes just a day after an officer-involved shooting was filmed by bystanders in Baton Rouge, Louisiana.

By early Thursday, protesters had begun to gather outside Minnesota Governor's Residence.

The U.S. Justice Department released a statement saying it "is aware of the incident and is assessing the situation."

Reynolds narrates the incident throughout much of the video -- alerting her followers and the viewing public to what was happening.

She's calm and composed at first; a striking juxtaposition to the officers outside the vehicle.

Outside Castile's car, Reynolds begins to cry and lose her composure. She's wails. Police can also be heard in the background.

The camera keeps pointing up at the sky, before it goes black while the voices continue.

Reynolds eventually gets the phone again and begins filming from the back seat of the police car with the little girl.

She seems calm again, alerting viewers to her location and asking someone to come pick her up.

"I can't believe they just did this," she says.

Then she screams, her anguish clear.

CNN's Dave Alsup and Joe Sterling contributed to this report