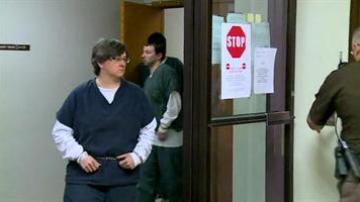 ST. JOSEPH COUNTY, Ind. -- The woman who was accused of catfishing two women and convincing them to deposit money into her bank account pleaded guilty to two counts of theft Wednesday morning.

Kim Savage, 44, was charged after two women came forward in October 2013 claiming they had been victims of scam perpetrated by Savage.

In court, Savage admitted to the judge she posed as a male Marine on multiple occasions.

Before her arrest, Savage was the head bookkeeper for the St. Joseph County Clerk's Office.

Her job was to collect restitution money from people convicted of a crime.

She no longer works for the clerk's office.

After court, her minister and flight instructor Robert Baird said this is out of character for the woman he thought he knew.

"For her flight instruction she did her homework. She was a sharp student, really loved flying as I do and just everything about her- I really have nothing negative to say about her," said Baird.

Baird was the only person who showed up in support of Savage.

He says he and his wife plan to take her in once she's out of jail.

"Her house, her car, everything is gone. And I know she's going to have a terrific future and my wife and I are going to help her start that future," said Baird.

That new future might not begin for quite some time.

Savage will be sentenced at the end of next month and could face up to four years in prison.

Baird says Savage is already talking about rebuilding her life.

"She said she wants to go back to the jail and tell people this is not the end of your life. this is the beginning of your life. You leave here- you're a different person- and it's time to start all over and do things right," said Baird.

Savage doesn't have a prior criminal record and lawyers are still adding up the amount of money she stole.

Her friend thinks her faith is the reason she confessed before the case got to trial.

"She said she's owning up to everything. She's not going to defend herself. She's just going to come completely clean of it and let whatever happen and then she's going to start over and she's going to do a great job of it," said Baird.