Woman rushed to hospital in townhome fire near Notre Dame 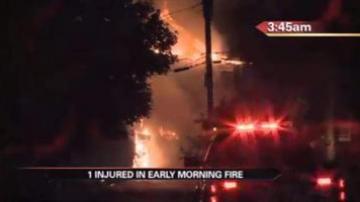 SAINT JOSEPH CO., Ind. - A woman was rushed to the hospital early Monday morning after flames ripped through townhouses at Dublin Village.

A former firefighter for Niles Township was working at a nearby hotel and said she sprinted across the parking lot and called 9-1-1.

She said she started banging on doors, making sure a mother and daughter in the unit next-door made it out safely.

Then, she heard someone yell, "Fire!" and found the victim, a young woman, lying on the grass.

"I checked her pulse, her wrist, her neck. It was slowly fading. All I did was a couple of chest compressions and she did light gasps for air and I just scooted her as far away as I could,” said Brittany Molnar.

Molnar was still shaken up a couple of hours after things calmed down.

“I was freaking out. I was recapping it in my head, whether it was safe. Clearly it wasn’t safe enough in the back. So I went to the front and I knew if I would have opened the door it would have flashed over. And the whole fire would have came out,” said Molnar.

The Roseland Police Department got to the scene and assisted the victim before an ambulance rushed her to the hospital.

Battalion Chief John Vance, with Clay Fire Territory, said crew s got to the scene within about five minutes and were able to get the fire under control smoothly.

“They had a lot of fire. And this really was spreading very quickly. So they did a great job knocking it down, and cutting down the fire spread,” said Vance.

Molnar said this was her first fire as a witness, and the experience brought her back to her days as an EMT.

“It was weird not to be able to gear up and go in. I’ve been off for like a year now. So just to be able to actually see it and not do much about it, it definitely shook me up a little bit. Give me a new hindsight. I definitely miss it.”

No word yet on the victim’s condition or the cause of the fire.

The townhouses near the end unit were also heavily damaged from smoke.