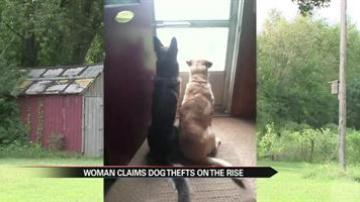 WALKERTON, Ind. -- A St. Joseph County woman is looking for answers after she says her two dogs were stolen from her backyard.

Police say dog thefts are not unheard of, but they are not seeing an increase in reports.

“Max was 6-years-old. He was our yellow lab and the love of our life. And Ruger, our German Shepherd, was two-and-a-half,” says dog owner Mary Johnson.

Johnson says the pair were inseparable.

She said they were both outside in the backyard one February day when they vanished.

She says their footprints trailed all the way to the end of the driveway then vanished, leading her to believe they were lured away from their happy home and taken.

“It is real. It is happening. Please watch your pets. When you take them out, take them out on a leash. Don’t think that they’re safe in your backyard," said Johnson.

In response to her missing dogs, Johnson alerted the St. Joseph County Police and filed a police report with Walkerton Police.

In the days that followed her pets’ disappearance, Johnson passed out fliers asking everyone in the community to be on the lookout for Max and Ruger.

“They were found deceased on April 24th, straight back on the tracks,” said Johnson.

Her vet performed an examination on the dogs and says their deaths were not consistent with a train collision.

Johnson believes the dogs were poisoned.

Johnson did some research and discovered pure bred dogs like hers are money makers for criminals who plan to resell the dogs or use them for dog fighting.

“I am very alarmed by this. That this is happening in our community, in Michiana," said Johnson.

Since the death of her dogs, Johnson has heard of at least two other instances where dogs were stolen in Michiana, but she never imagined it would happen to her.

“If I’d have known that dogs were being stolen in our area, or there was a propensity they could be, I would have held them closer,” said Johnson.

Police say they are not seeing an increase in dog thefts, but it is a good idea to keep an eye on your dog when they are playing to prevent this from happening.
Share this article: