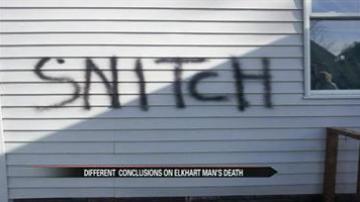 ELKHART COUNTY, Ind. -- An Elkhart woman found her husband hanging in the entryway of their home Saturday night. Officials declared 35 year old David Davis’ death a suicide, but his wife is convinced he was murdered.

Crystal Davis says the morning after she found her husband hanging in the hallway, she found the word "snitch" in black spray paint on her house.

"That lets you know he didn't kill himself, that right there," said Davis.

Nearly every window of her home is busted out, and every door is off its hinges.

She says Saturday night she discovered her husband's body, covered in dark spray paint, dangling over the banister.

"I seen someone black, just solid black and i just ran back in here and started screaming for him," said Davis.

Davis says she believes that same can of spray paint was used the day after her husband died to write "snitch" on their home.

The coroner told Davis they will not be performing an autopsy, because it was clear this was a suicide.

That doesn't sit well with her.

"I want justice for my husband's death. I don't want them to keep getting away with saying this is a suicide when there's all this evidence that there's not," said Davis.