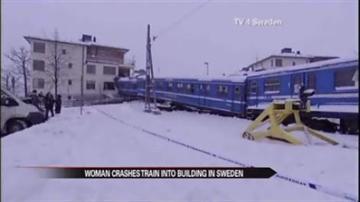 SWEDEN — Police in Sweden said a 20-year-old woman took a train for joyride and crashed it into an apartment building.

According to police, the woman took an empty train from a depot and somehow managed to get it started. They said she drove it until it derailed and crashed into a building.

The woman was hurt in the collision and was airlifted to the hospital.

Police later detained the woman for endangering the public.