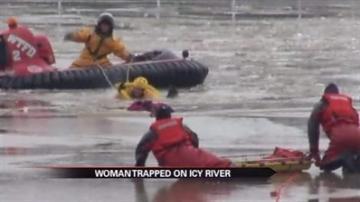 TOLEDO, Ohio. -- Someone who thought they saw something strange in downtown Toledo was on the right track.

When firefighters got there Sunday, they discovered it was a woman who was clinging on to ice in the Maumee River. Half of her body was stuck in the icy water.

Divers in specialized suites got into the water first but it took hovercrafts and the US Coast Guard to rescue her.

"I'm surprised they were able to stay. They were struggling after a half hour or so trying to gain on the surface of the ice and that's a risk there because they can break off ice and go on under," said Chief Dennis Facer, Toledo Fire Department.

The woman was rescued after being in the frigid water for more than an hour. She was taken to a hospital for treatment.