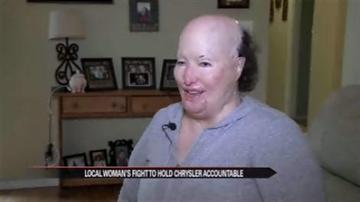 SOUTH BEND, Ind. -- In January 2012, Ana Piña was driving her 2000 Jeep Cherokee when she was rear ended and the fuel tank exploded.

She was severely burned in the accident and is part of the national fight to hold Chrysler accountable. It has been a year and a half since Ana Piña survived the fiery crash.

She had severe burns over 40-percent of her body. You can see the scars on her face, fingers and body.

You can also see joy when she watches her children playing after losing so much time with them during her recovery.

“I don't remember. I just remember when I woke up in the hospital 3 months later,” said Piña.

She is still recovering.

The pain from the accident doesn’t compare to the pain of losing custody of her twins while she was in a coma and couldn’t care for herself.

Her now, 7-year-olds, had to move to Florida with their father.

She was reintroduced to her children over Skype, and finally got to see them nearly 10 months later for Thanksgiving.

Piña just returned on Monday from a trip to Washington, D.C., to tell her experience to the National Highway Traffic Safety Administration (NHTSA).

Piña told NHTSA she suffered no injuries except from the flames according to her lawyer, Ines Murphy.

This was a minor accident according to Murphy.

Piña did not have any broken bones, and she should have been able to open her car door and walk away from the accident.

Instead she was trapped inside a burning vehicle after the fuel tank exploded.

It suggests adding a trailer hitch to the back of those vehicles to protect the fuel tank.

The car Piña was in when the accident happened does not fall in those groups.

“I was angry that's why I went to Washington,” said Piña.

Auto safety groups asked the NHTSA on Monday to only approve Chrysler’s proposal only if the retrofit passes crash tests that show it will help protect the fuel tank according to ABC News.

In a statement released to ABC News, NHTSA said that the agency’s “investigation remains open pending completion of the agency’s review of the remedy announced by Chrysler.”

Piña currently has nearly $2 million in medical bills and does not have insurance.

She is appealing to the Indiana legislature to change the Indiana Product Liability Act (IPLA) that doesn't allow Piña to sue.

Murphy said the IPLA is “an anomaly among statutes of repose throughout the country - it makes not one single exception for corporate malfeasance, such as actual previous knowledge of the danger, failure to warn of the danger upon knowledge, concealment of the danger, or even fraud. It was written to shield corporations like Chrysler of liability even in the most egregious, blatant cases of wrong doing. It does so at the expense of every citizen in Indiana.”

Piña said she just wants to go back to living a normal life and make sure another family never has to experience pain like she has.

Click here for more info on the Jeep recall