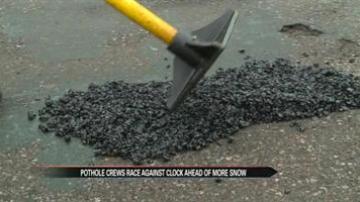 SOUTH BEND, Ind. -- Now that most of the roads are clear of snow because of a warm-up, it's snowing again. South Bend's Street Department crews are exhausted. They not only plow the snow, they also have to fix the potholes left behind.

It's a tough and tedious job to fill potholes.

Forty members of the Streets Department have been working around the clock. They keep the roads clear of snow and safe from potholes.

"Basically the last few weeks have been nonstop snowfall and when we got done with the snowfall we had to worry about the deep freeze, then the thawing and we had about an inch of rain come through," said John Pemberton Jr, Manager of the South Bend Streets Department.

Potholes are all over the city. Many are disguised as deep puddles.

To repair the holes, crews first sweep away the debris, spread out a steaming "cold weather patch" and then stomp it down.

They move on to the next hole and repeat the whole process again.

Tuesday they were out patching potholes.

"They actually are on standby to come in early if we need them because the snow's expected to come later this afternoon into the evening," said Pemberton.

The nightshift crew will likely report to work before the usual 11 p.m. call time.

Catching up on sleep after last week's snow plowing marathon will just have to wait.

"Everybody here still has a family obviously. We got guys that just started that are in their 50s and are near retirement that have just as much to offer as some of the younger guys that come in with a lot of experience," said Pemberton.

The city also wants drivers to be careful when road crews are out and give them space to do their job.