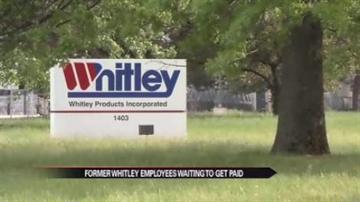 PLYMOUTH, Ind. -- Not once, but twice employees at Whitley Products Inc. in Plymouth have been laid off.

Several former employees say the company has not given workers their final pay check, like it promised.

A company rep says they are just waiting for the new buyer’s transaction to close. Until the company get the proceeds from the sale, reps say they just do not have the money.

Yet, employees say that is the same story they have gotten for three weeks.

"They kept telling us no, no, no, they are going to buy us. We are going to be OK, we will be all right until May 22nd and we believed them," said former setup press operator Nel Burger.

On May 6th the Plymouth plant’s doors shut and employees were once again out of a job.

"They told us that as soon as the doors shut we would be getting our pay," said Burger.

That was three weeks ago. Employees say they still have not received their final paycheck or their vacation pay.

"How do I tell my daughter there is no money coming in, that I may not have enough money to feed her and stuff like that," said Lori Hines. "I mean, what do you do?"

These former employees say until they get their final pay check, they cannot even file for unemployment.

"It’s been a real struggle," said Karla Kimmel. "My husband and I live pay check to pay check as it is and to go without a pay check, it’s been really hard."

Now, every time they call the company, workers say they get the run around.

"Every week it’s a different story and I would just like them to be honest," said Kimmel.

ABC 57 news stopped by the company’s office for an explanation.

"We have a signed purchase agreement with a buyer and the closing has taken longer than both parties anticipated," said agent of the receiver Craig Pace.

Pace says until Whitley Products Inc. get the proceeds from that transaction, it cannot pay the employees. But he says making the deal happen is a priority, so workers get their money.

"We are working diligently to get people paid, people worked hard. This company has been around since the 40s and has been providing great products and we want to see that continue, but our first priority is get these people paid," said Pace.

Pace says the sale will close this week. Once that’s done, he says the company will file its payroll and employees should see the money in their accounts within two days of that.