World Cup 2018: Goals, tears and earthquake alerts on the road to Russia 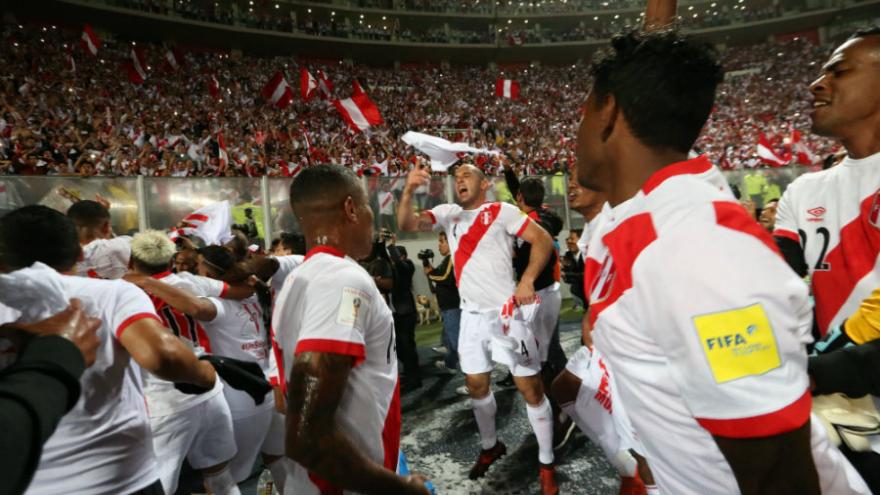 (CNN) -- After nearly three years of fierce competition, 871 matches played, 2454 goals scored and 2965 yellow cards, the wait is over -- World Cup qualifying has come to an end and we now know who will compete next summer for the coveted trophy.

On Thursday, Peru became the final team to secure a World Cup spot thanks to a 2-0 win over New Zealand in the second leg of their playoff match, ensuring qualification for La Blanquirroja for the first time since 1982.

Such were the magnitude of the celebrations in Lima when Jefferson Farfan put Peru 1-0 up, an earthquake detector in the city was activated at the exact moment of the goal.

"We will clarify again," wrote Chile's official seismology page, "an earthquake alert was activated due to the underground vibration generated by the fans."

As well as tremors, there have been plenty of surprises, and many tears, on the road to Russia but who is in and who is out? Who are the favorites and what can we expect at Russia 2018?

To Russia with love

Thirty-two teams will take part in Russia 2018. The hosts were already guaranteed a place, but the others have been whittled down, courtesy of an arduous qualification procession, from 209 nations at the start of qualification to 31.

Many of Europe's leading countries have made the cut. Four-time World Cup winners Germany, former champions France, England and Spain and Euro 2016 champions Portugal will be among the favorites. They are joined by Belgium -- who with 4.3 goals per game averaged the most goals scored in qualifying -- Switzerland, Croatia and Denmark.

And let's not forget about Iceland, a country with a population of just 335,000, who became the smallest country to qualify for a World Cup.

Egypt, Morocco, Nigeria, Senegal and Tunisia are the qualifiers from Africa, while Australia, who scored 48 goals in qualifying -- which was more than any other country -- are through, along with fellow Asian qualifiers Iran, Japan, South Korea and Saudi Arabia.

South America is represented by Brazil, Argentina, Colombia, Uruguay and Peru, while Costa Rica, Mexico and Panama make up the slots allocated to North and Central America and the Caribbean.

Here are the countries who will be at Russia 2018:

North and Central America and the Caribbean:

Who do you think will win the 2018 World Cup? Have your say on CNN Sport's Facebook page

With the joy of qualifying, there inevitably comes heartbreak for those who miss out.

Though Russia 2018 will see the best of the best go head to head, some of world football's most recognizable faces will be absent.

Back-to-back and reigning South American champions Chile finished sixth in qualifying, meaning the likes of Alexis Sanchez, Arturo Vidal and Claudio Bravo will be watching the World Cup on their TV screens.

Italy, champions in 2006, will also be missing, as defeat to Sweden saw them miss out for the first time since 1958. That defeat heralded the end of the international career of Gianluigi Buffon, the most capped player in Italian history with 175 appearances.

Wales, the surprise semifinalists at Euro 2016, finished third in their qualifying group, which means the World Cup will be deprived of Real Madrid star Gareth Bale and Arsenal midfielder Aaron Ramsey.

Both nations had qualified for three successive World Cups but failure to reach Russia 2018 ended up costing Belgian Marc Wilmots his job as manager of Les Elephants.

Defending champions Germany are bidding to become the first team to retain the title since Brazil did so in 1962. Ranked No.1 in the world and unbeaten since their Euro 2016 semifinal defeat by France, Joachim Löw's men were peerless in qualifying, winning all 10 of their matches and scoring 43 goals in the process.

Five-time champions Brazil became the first South American team to qualify for Russia 2018 and their form in the last 18 months has helped heal the wounds of that 7-1 semifinal thumping by Germany at their home World Cup three years ago.

Coach Adenor Leonardo Bacchi, known as Tite, has overseen a vast improvement since he succeeded Dunga in June 2016. Brazil remain undefeated in competitive fixtures since the new man took charge and won 10 of their final 12 qualification matches.

With Lionel Messi in their ranks -- the Barcelona star scored an incredible hat-trick to secure Argentina's place in Russia - two-time champions Argentina are among the bookmakers' favorites, as are previous World Cup winners Spain, France and Portugal.

Belgium have promised much with the talent at their disposal, such as Chelsea's Eden Hazard and Manchester City's Kevin de Bruyne, and after a fine qualifying campaign -- they topped their group with an unbeaten run -- 2018 could be the year the Red Devils finally blossom.

READ: How Drogba and his Ivory Coast teammates helped end a civil war

Now that the 32 teams have been decided, players, managers and fans wait in expectation for December 1.

In the State Kremlin Palace, Moscow, each nation will find out who they will face in the World Cup groups, labeled A to H, and each consisting of four teams.

Every country will be placed in pots numbered one to four (one being the highest), based on their FIFA ranking as of October 16, 2017.

Seeding in a higher pot should, in theory, allow for easier qualification to the knockout phase of the tournament.