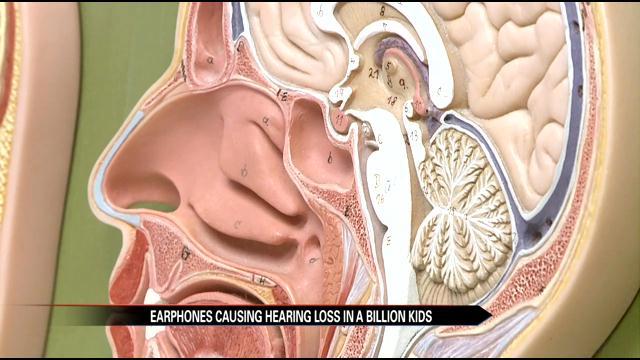 Parents be aware, your child may be putting their hearing at risk by listening to their iPod's or cell phones too loudly.

David Isaacson, an Otolaryngology doctor with the South Bend Clinic says, "Now more than ever we are seeing young people being exposed to loud noise, it use to be more of an industrial phenomenon."

Decades ago, when many young people were working in noisy conditions like on railroads and factories their hearing was dwindling prematurely.

Fast forward to today where modern electronics have our young people by the ear.

Dr. Isaacson says he is seeing teens as young as 15 coming into his office displaying the same signs of hearing loss as someone who worked in construction for 20 years.

"We have young kids that start using electronic devices when they are eight or nine, ten," said Dr. Isaacson.

According to the World Health Organization 1.1 billion young people are at risk of hearing loss due to unhealthy listening through headphones and noisy environments like bars and concerts.

Everyday noises can put anyone at risk.

How about those headphones, when are they just too loud?

Isaacson said, "If they cannot hear the conversation next to them the level of hearing exceeds the normal ambient noise to the point where it is at risk for hearing loss."

The World Health Organization also says hearing loss risk start at 85 decibels for eight hours or more, which is comparable to a blender's hum.

The best advice doctors say if you are going to be attending something like a concert to wear ear plugs which can lower your risks.