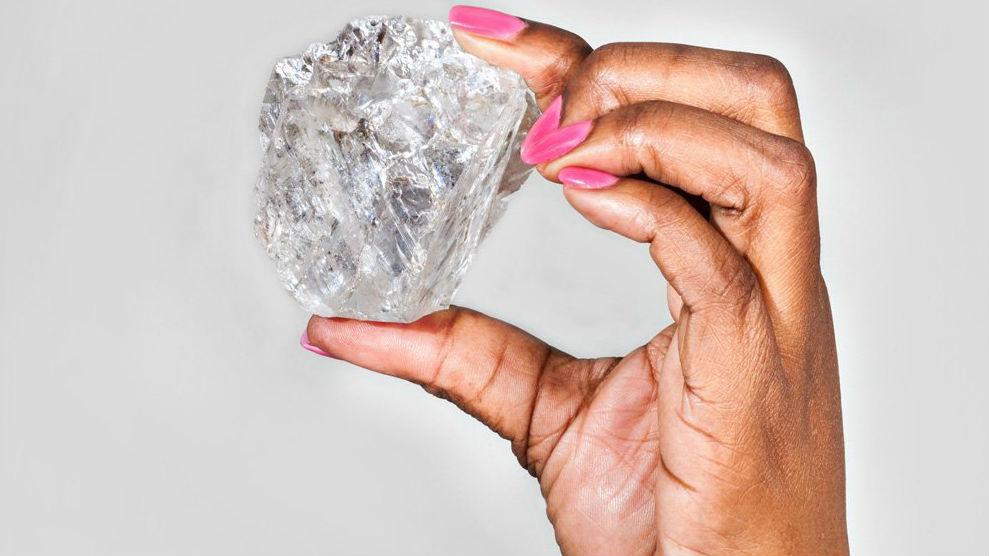 LONDON (CNNMoney) -- The world's second-biggest diamond is up for auction. Its expected price: $70 million.

Lesedi la Rona is an 1109-carat diamond. It's the size of a tennis ball.

The gigantic diamond will be auctioned by Sotheby's in London next month.

The diamond was found in Botswana in southern Africa in November. It took months to determine even an estimated price, because it is so large that it does not fit into conventional scanners used to evaluate a stone's potential worth.

Sotheby's said the diamond is the largest rough, gem-quality diamond in existence today. It is believed to be between 2.5 billion and 3 billion years old.

"Not only is the rough superlative in size and quality, but no rough even remotely of this scale has ever been offered before at public auction," said David Bennett, chairman of Sotheby's Jewellery Division.

Lucara, the Canadian company that owns the diamond, called it the biggest diamond found in more than 100 years. The discovery sent the company's shares soaring.

Potential buyers will be able to view the stone before the auction. The diamond will be on display at in New York on 7 May, and in London from June 18 to 28, Sotheby's said.

The diamond's name, which means "Our Light" in Setswana, the national language of Botswana, was picked in a public competition from more than 11,000 entries.

The largest diamond is the 3,106-carat "Cullinan Diamond" found in South Africa in 1905. From that was cut the "First Star of Africa," which now adorns the Royal Scepter -- one of the British crown jewels now on display at the Tower of London.