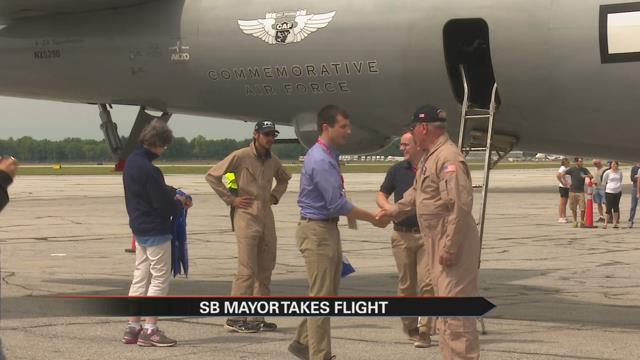 Hundreds of Michiana families have been stopping by the South Bend International Airport to get a close-up look at a few pieces of aviation history on this holiday weekend.

With dozens watching from below, a piece of history took off from South Bend’s airport Sunday morning with a special guest inside.

“[It was] a really extraordinary experience!” South Bend Mayor Pete Buttigieg said. “A unique perspective on our city from above and also just a great way to kind of get in touch with our own history and recognize what it was like for the young crewmen who flew missions in World War II in aircraft like this.”

The aircraft he’s referring to is the B-29 Superfortress, a bomber plane used in World War II and the Korean War.

The one at the event is the only one of its kind still flying today, and it’s part of a fleet of military aviation history stopped in South Bend this Fourth of July weekend.

Mayor Buttigieg had a spot on board the plane for a flight over Michiana on Sunday.

“It’s one thing when you see it on the pages of a history book; it’s another when you actually see an aircraft like this taxiing and taking off right here at South Bend’s airport,” Buttigieg said. “So, it’s a great day for the airport and something very special for the community.”

The military planes are here as part of the ‘Commemorative Air Force AirPower History Tour.’

It’s the first time the touring company is visiting South Bend, and it’s all thanks to Atlantic Aviation’s Amanda Humes, who invited the group after seeing them perform in Fort Wayne.

Hundreds of Michiana families stopped by the event throughout the weekend, including amateur pilot Stephen Stachowski and his father, Joseph.

“To see it in person is just amazing for me, being a pilot,” Stephen said. “And having the opportunity to see it with my dad makes it that much more worth it.”

You can tour the aircraft, snap pictures during takeoff and even pay for the chance to ride along for a 30-minute flight.

Buttigieg said the event combines history with pride – honoring veterans, our nation and celebrating this historic aircraft; some of its parts built right here in Michiana.

“What better way to get in the mood for Independence Day then to be in touch with our history and to recognize what so many veterans of World War II did and went through in order to keep this country safe and make a day like this possible,” Buttigieg said.

The last day of the event is Monday, July 4, from 9 a.m. to 5 p.m. at Atlantic Aviation, located at South Bend International Airport.