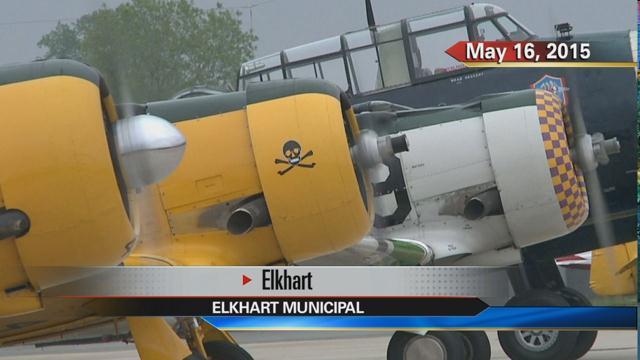 People who attended the "Salute to Veterans" at the Elkhart Municipal Airport on Saturday and Sunday were able to see how life would have been like for many of the troops 70 years ago.

For some it was a trip back in time, while for others they were able to share in the experiences of war.

Larry McDaniel, a Navy veteran who served for 27 years and also in the Vietnam War, attended the event. He said it brought back vivid memories for him.

“I got shot at. Luckily I was missed but I've seen many people who came back maimed like they're doing now. My country means a lot to me and if I could still be defending it today, I would,” McDaniel said.

He added that the best way for history to be carried on is by teaching the younger generations.

“Kids today really do not know what's going on,” he added.

The Beaver family also came out to the event and said it was a good opportunity to teach their two children first hand about history.

“His grandpa was in World War II so he's really interested in it because of that and I think it's really educational and really exciting for them to see it first hand,” said Dana Beaver about her son.

For Ron Schinleber, a re-enactor with the Corporal 2nd Infantry Div., he has a personal connection as to why he is involved.

“I do it because my dad and my uncle were both in World War II and out of respect for what they had to go through. I also have a fascination with history," Schinleber said.

This experience brought to life what he has learned in history books.

“It just brings it alive when it's more than just dates and numbers, it's people and what they experienced,” he added.

He has been doing WWII reenactments for about five years.

“You really get caught up in it when you're out there and the explosions are going on and there are explosions all around you, and you really start to feel that maybe this is a little more real than I want it to be.”

The battle began at 11 a.m. and the event wrapped up after 4 p.m. after a tribute to military veterans.