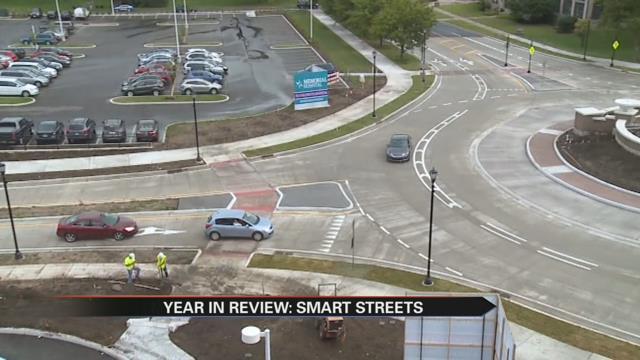 But while some were in favor of the major renovations, others were not so on board.

“We do expect traffic to slow down a bit so we ask people to plan for that,” said Jiti Kain, Deputy Director of Public Works.

“People will have to start to understand what best route to take for them to get from point a to point b, and that doesn’t really happen overnight”,” said Kain.

And patience was tested.

“This is significant. Traffic is just kind of crawling along. It’s not open for you,” said Courtney Laszawski Mark’s Auto Car Co-owner.

"I didn't want to come out here and say mission accomplished because there are several more stages to go. Mid-October is when we'll have Main Street going two ways then we have the November deadline for Saint Joseph,” said South Bend Mayor Pete Buttigieg.

As October approached, the finish line was in sight.

But the changes still brought some fright.

“If you really want to get from one end of the city to the other, you probably want to find another route,” said Mayor Buttigieg.

November arrived and the final phase was near complete.

But some business owners on Michigan and St Joseph streets were less than thrilled.

“Customers not being able to get down here the business just wasn’t able to withstand that, I honestly have no idea if I can bounce back,” said Michiana Brewers Supply owner Aaron Goldstein.

The debate, were smart streets good or bad, had become as two-sided as the streets being built.

Then the white stuff began to fall.

“We know we’re going to get hit with some additional snow and potentially some ice so preparing for that,” said South Bend Director of Streets Derick Roberts.

Just how smart these streets really were, was put to the test.

“It is a different pattern. It’s something we had to shift up as we made our routes, but that hasn’t been much of an issue at all,” said Roberts.

Now 2016 is in the books and the city will have to give these streets a shot.

Just as those geese did in a video demonstrating the proper use of a crosswalk in front of South Bend’s newest roundabout, already have.