Yellow River to remain high for a week

NOW: Yellow River to remain high for a week 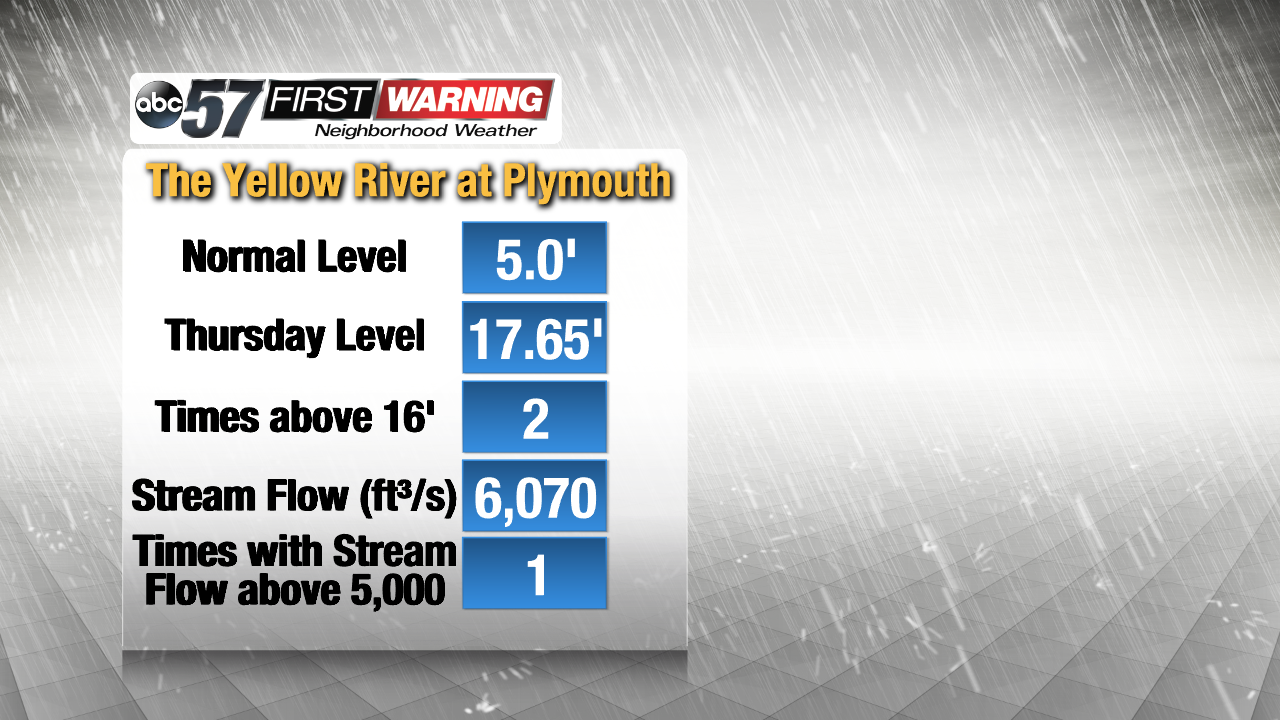 The flooding across Michiana has been nothing short of extreme and record-shattering. Nearly every river and their respective tributaries rose to either Moderate, Major or Record Flood Stage thanks to melted snow, record rainfall and a frozen ground. That includes the Yellow River in and around Plymouth. It rose to a record-breaking 17.65' Thursday afternoon, which is nearly a half-foot above the previous record of 17.1' set back in 1954. The river has only risen above 16' twice before this week's flooding! And, believe it or not, the Yellow River in Plymouth usually has a depth of around five feet! That means this flood caused the waters to rise more than 3.5 times above their normal level!

The depth of the river isn't the only way to describe the magnitude of the flooding along a particular river, creek or stream. Stream flow is a term that can be used to talk about the amount of water flowing past a certain point along the river in a certain amount of time. This week's flooding caused the Yellow River to reach a stream flow value of 6,070 ft³/s! That is by far the highest value ever reached in the river's history. 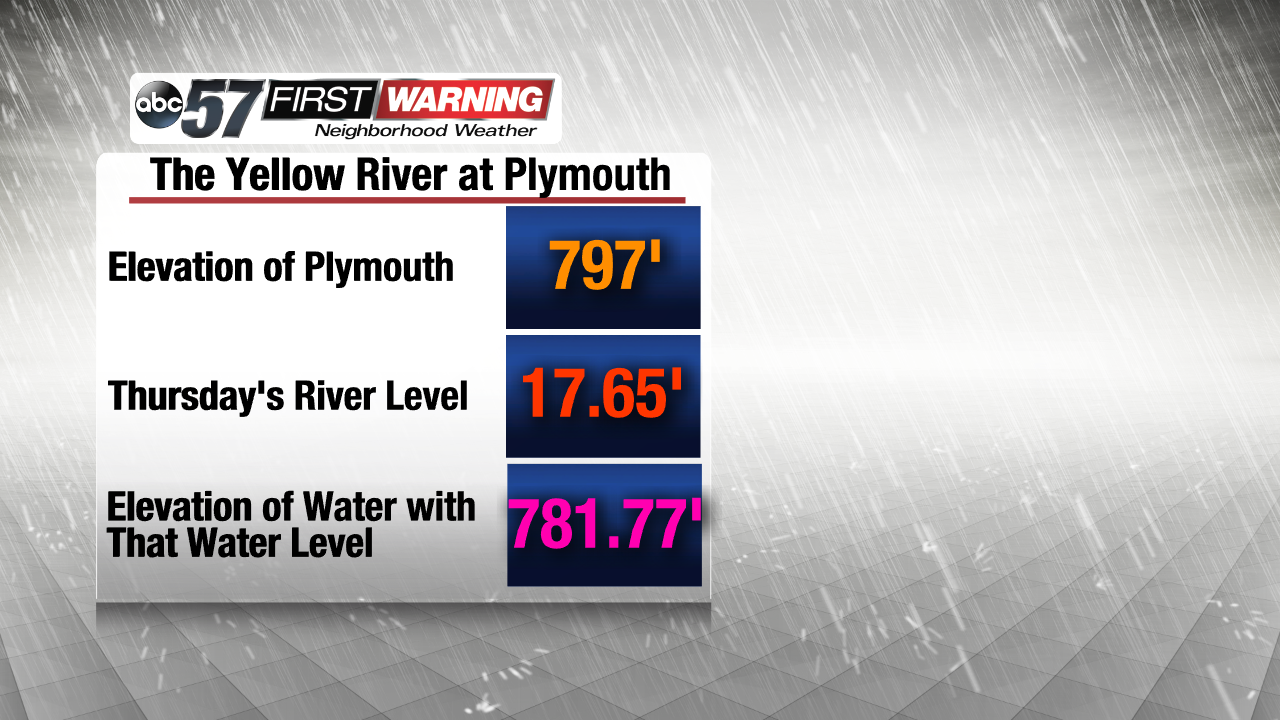 Despite the extreme flooding that did occur, you may be asking yourself why more of the city didn't go under water. Well, it's all about elevation. The City of Plymouth has an average elevation of around 797' above sea level. The elevation of the water after the river rose to 17.65' was 781.77' above sea level. That is plenty of water to flood areas along and near the river, but not quite enough to flood the center of the city. Thankfully, it is virtually impossible to get enough of a river rise to reach an elevation of 797'. 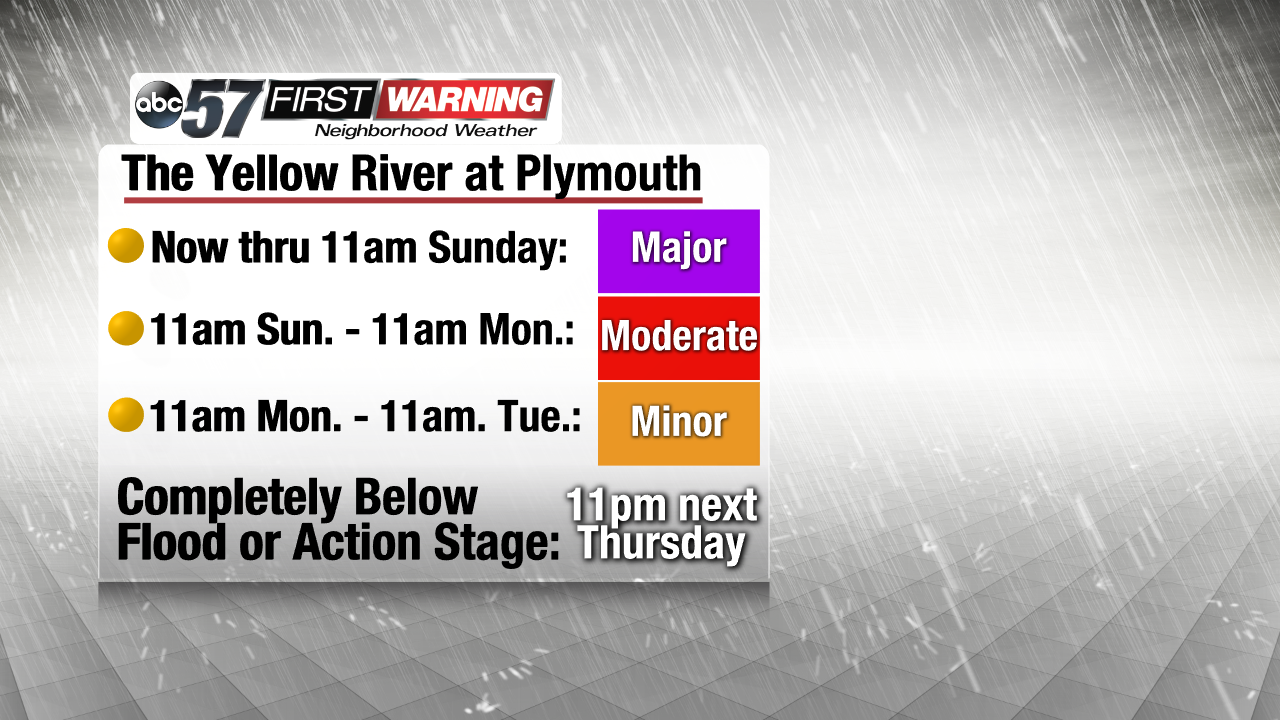 The good news is the river is receding, and will continue to do so over the next several days. By Sunday afternoon, it will drop below Major Flood Stage. By next Tuesday afternoon the river will subside below all flood stages. And, be next Thursday night, the Yellow River should be below any flood or action stage. Unless a healthy rain falls over the next week, this is likely the pattern that will occur with most rivers; a steady and slow return to normal river levels.