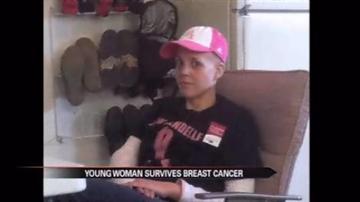 SOUTH BEND, Ind. -- The Susan G. Komen Race for the Cure took place on Saturday and a majority of the participants were breast cancer survivors. They have incredible stories of overcoming odds and discovering their tumors at home during self exams.

One of those women was just 29 years old when she found a lump last year. Now Kendelle Niespodziany is 30 and she is cancer free. But her story is all too common for women in their teens and even twenties.

Niespodziany became an inspiration for her hometown of New Carlisle. The young women at the salon that helped her shave her head and cope with losing all of her hair, now are avid about self exams and cancer screenings.

Her stylist, Natalie Goforth, even shaved the sides of her head to show solidarity with Niespodziany’s cancer battle.

“You just don't realize it happens to young people, it's just a shock,” she said.

Niespodziany discovered her own lump when she says she randomly decided to do a self exam in the shower and felt like something was not right.

“I was in the shower one morning getting ready for work and I felt a lump,” she recalled.

That was one year ago and she never anticipated the journey that would lie ahead.

She had a lumpectomy, a double mastectomy, chemotherapy and lost all of her hair.

Something she struggled with the most as a woman.

“I was a hat person, I couldn't do the wigs. You catch people looking at you and I wonder what they are thinking when they see me,” said Niespodziany.

Now she says it is all about how she sees herself; as one of the new faces of breast cancer.

They are young moms, barely 30, and they are fighting the belief that this disease does not affect young women.

“I don't have to worry about that until I am 40 and it's not true, it is definitely not true. It can happen to anybody at any age,” she said.

Dr. Robin Zon at Michiana Oncology says she can attest to that.

Dr. Son says she sees teens and women in their 20's all too often and that’s mostly because it is the most common type of tumor for young women and seems to appear more aggressively than in older patients.

“There appears to be a slight increase in the stage of the disease which is worrisome to us,” Dr. Zon said.

Niespodziany's tumor went from stage 1 to stage 2 in just a few weeks, but she turned her cancer around in a matter of months.

“In my head I wanted to do everything possible I could do to make sure nothing would happen again so I can make sure I am here for my little girl,” she said.

Now her future is about being cancer free for her family and for the one life she might save by sharing her story of early detection and survival.

“That is my biggest hope out of this whole thing that I can spread the word, don't ignore it because I was one of those people."