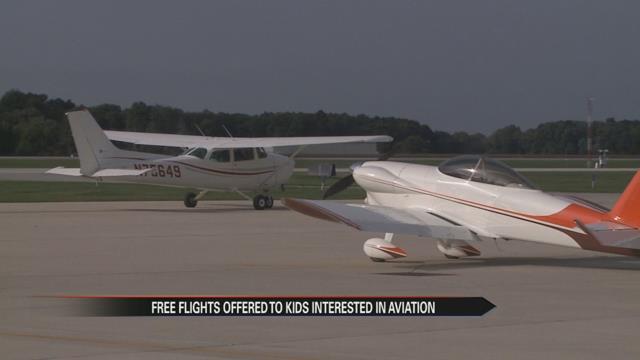 On Saturday,the Young Eagles Program hosted an event at Elkhart Municipal Airport for first time flyers.This event takes place in hopes of making the dream of flying a reality.

Children ranging from ages 8 to 17, that want to learn the ropes of aviation,  got to fly all morning. The kids were able to have a one-on-one experience with the pilots.

Pre-registration started about a week ago and many who were here said this has eased up the process of being able to get on a plane.

Although it was a little chillier than usual families lined up to make sure they didn’t miss their name being called.  Some were even a little upset they had to share their flight experience.

“I thought I was going to be the co-pilot but she (my sister) stole it and I got mad,” said one of the Young Eagles.

Participating in this event has become tradition for some parents.

“Well actually I took my kids, his father and siblings, years ago,” said Ben Daniel, a man who has been coming to these events for a while now. “When I heard it on the radio yesterday I said, ‘I have get my grandson to come out here.’”

Everyone working here is a volunteer and so far the young eagles program has flown over 2 million kids thanks to their help.

Busch explained that the goal here was much greater than just the free flight.

This program is sponsored by Aluminum Angles and thanks to sponsors like them it has grown over the years.

“In the last three years it has really taken off to where every year we were flying 250-300 kids,” said Busch.

Volunteers say they’re excited for what the program has in store.

A quick fun fact! A pilot here has nose art on his plane from WWI, check out the picture up top.