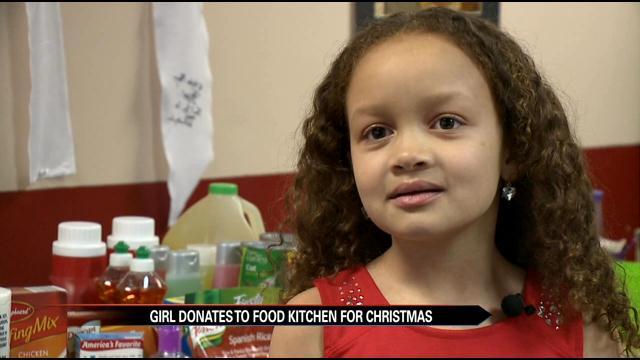 Santa came as a seven-year old girl in the Riverpark neighborhood on Christmas Day and she delivered something other than presents.

Christmas was about more than presents for Ailey Kearns.

She brought over a hundred canned goods to Church Lady and Friends Soup Kitchen.

“A TV, and a computer, and a bunk bed for my american girl doll…” said Ailey Kearns.

She beams as she shares what Santa left under her tree.

It was Ailey that brought Christmas to those less fortunate.

“We're giving to others on holidays so that's kind of like their present,” said Kearns.

“Mankind should be my business, and that's what Ailey is doing. She's taking care of mankind,”  said Mary Booth, the pastor and founder of Church Lady and Friends.

“Some rice, a lot of rice and cereal, apple sauce,” said Kearns as she listed off everything she collected.

A collection of two months of work layed out on the table at Church Lady and Friends Food Ministry.

“It's an overwhelming thing for Ailey, because I don't think she realized how many people we were helping,” said Booth.

Between seventy-five and one-hundred people will benefit in the soup kitchen alone.

“I was doing something that will actually keep people alive,” said Kearns.

Ailey decided on her own that she would go from house to house asking people to donate canned goods so that on Christmas Day she could give the gift that so many people need.

She said she got the idea from the kind act of Councilman Derek Dieter, when he planted book huts in a couple of South Bend neneighborhoodsn October.

“I saw a lot of people on TV helping people and I decided I wanted to do that too,” said Kearns.

Santa granted seven-year old Ailey's Christmas list, because without a doubt this young girl was nice this year and she is hoping that more people realize Christmas is indeed about a little bit more.

“A lot of people need stuff on Christmas and so that's how I'm giving it to people,” said Ailey Kearns.
Share this article: