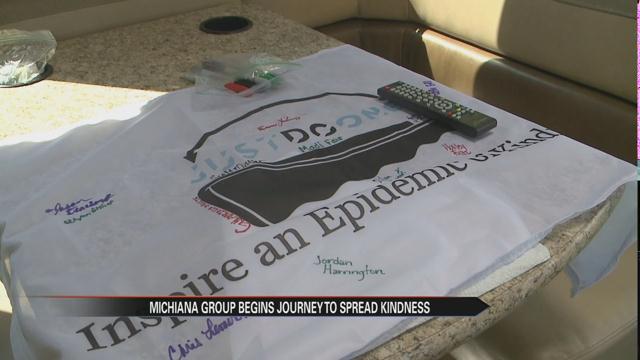 A group of three young Michiana men started a national tour of kindness on Wednesday, May 13th. Their mission is known as the ARK Project Now and they will perform 'Acts of Random Kindness.'

The group will be traveling 10,000 miles for 10 weeks. They began heading east on 80 with plans to make it all the way around the county.

Radelich, 21 years old of Elkhart, says he never imagined a line from a movie about a modern day Noah's Ark would lead to his own ark. Now an RV has been parked in his drive way ready to embark on his mission.

“He answers the question 'How do we change the world?' and he says, 'With one act of random kindness at a time.' And for some reason at that point in my life it really just spoke to my heart,” says Radelich.

In 2014 Radelich recruited two childhood friends to join him on his journey to travel 6,000 miles for six weeks spreading kindness randomly. That was their first trip.

“A lot of the time we just like to go to a new city and meet people and see where there are opportunities,” explains Dalton Lemert, a 21 year old student at Purdue University.

Lemert says last year they stumbled upon opportunities to give back. Their actions ranged from passing out free ice cream to helping a family whose young child was undergoing surgery.

Jacob Thatcher, 20 years old, is the youngest of the group and says this year traveling the country coast to coast he hopes to take ark project to the next level

“Last year we meet people and we handed them a rose randomly and they would just break down and be like this is the nicest thing that has ever happened to me all year. This trip I could love to get more politicians involved, to get more commitment,” says Thatcher.

Whatever random acts occur, the guys just hope a single message is received.

“Kindness is pretty universal, so the same act can have the same reaction from the poorest of the poor to the richest of the rich,” says Radelich.

After their journey the guys will be back in Elkhart in late July. While they are away, their journey can be followed on social media.