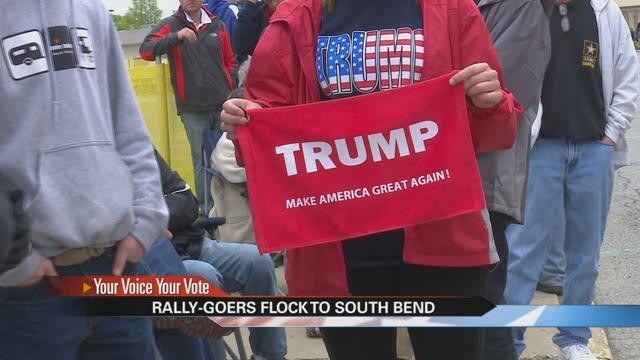 Donald Trump supporters of all ages attended the rally in South Bend Monday.

“I want to be here because Trump is actually going to do stuff for our state,” said 10-year-old Sawyer Lundberg.

The early birds in line for the rally ranged from undecided first time voters to children.

“I haven’t decided who I’m going to vote for yet, so I’m just coming to like kind of get a feel for it,” Taylor Pritchard, a first time voter said.

Buchannan brothers Stuart and Sawyer Lundberg are too young to vote, but said they support the Republican candidate..

“I love Donald Trump because he’s going to protect our nation with the wall,” Stuart Lundberg said.

The two brothers said they get their information from news and their parents.

While many of the pre-teen supporters aligned with their parents politically, 17-year-old Chris Krafft does not.

His mother is a Bernie Sanders supporter, while he supports Trump.

Pritchard says she is still undecided.

“Right now it’s really interesting to see the world at a turning point. I think whatever happens in this election is going to be a huge change from whatever we have now,” Pritchard said.