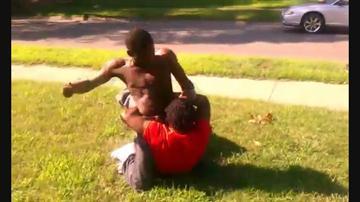 BENTON HARBOR, Mich. - Two young men in a violent brawl and it’s all captured on a cell phone video posted on YouTube. The only description given is ‘Benton Harbor’ and its poster is not identified. The video has neighbors concerned about dangerous activity in a Benton Harbor neighborhood and questions are being raised about what police are doing about it.

The video was posted about three weeks ago on YouTube under the title ‘Monroe Street Beat down’. ABC 57 identified the exact location where the video shot was shot, Monroe and May Streets on the city's Southeast side.
One of the houses in the background of the video belongs to 92-year-old Cecil Davis. He has lived in that home with his wife for 40 years.“In the last two or three years it’s (become) like that,” Davis says.
Davis says the type of behavior in the video is normal for that area. The intersection of Monroe and May Streets has become a hotbed for fights and crime.
Just two weeks ago, according to Davis, his lawn was set on fire and he doesn’t know why. Davis says he has tried to do something. “Sometimes you call police and they take their time getting there," says Davis. "Sometimes you've got to roll with the punches.”
“By the time we get there it’s dispersed," says Roger Lange, Director of Benton Harbor’s Public Safety Department. Lange says fights are something the department is trying to squash. Lange says officers get there as fast as they can. “We get there as expedient as we can, but don’t give up if we’re not right there on the spot.”
Lange says often times lights and sirens can break up fights quickly when they reported to police.
“I think something should be done,” says Davis. He says all his calls to police that he's put in the past few years should increase police patrols in his neighborhood. “The last few years I have left to live," says Davis. "I want to live it in peace.”
When ABC 57 brought the YouTube video to police they hadn't seen it before and nobody has ever filed a complaint about it. I had to file a police report out because I was the first to complain.
A Benton Harbor Detective did identify three men from the video and the video is under investigation. Police say there needs to be better communication lines between witnesses and police before neighborhood problems can be resolved.