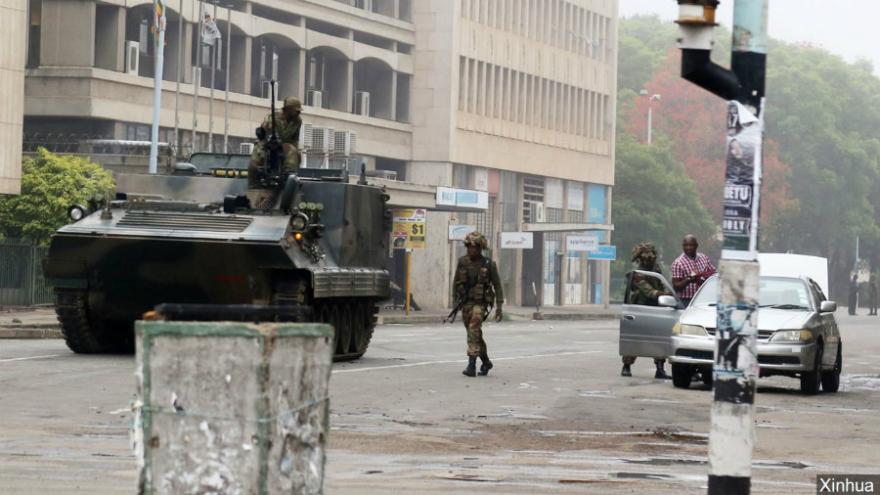 (CNN) -- Zimbabweans took to the streets of Harare on Saturday to demand the resignation of Robert Mugabe four days after a military takeover in the southern African nation.

The military intervened Wednesday, setting off a chain of events that plunged the nation Mugabe has led for 37 years into political uncertainty.

Crowds gathered in Harare for the rally, with some raising fists in celebration and cars flashing their lights in support. Others held signs that read "Thank You, ZDF," a reference to the nation's defense forces behind the military intervention.

"This is what we want as Zimbabwe -- Mugabe out!" a sign at the rally read.

Others wore clothes plastered with Zimbabwean flags while some sang and danced on the streets.

Mugabe has refused demands to leave office, prompting senior officials in the ruling party to call for his expulsion from the organization, along with his wife, Grace, who was the women's league secretary, according to state media.

As questions remain on who is in charge of the nation, Mugabe emerged from house arrest Friday to attend a university graduation ceremony in the capital, Harare.

The veteran leader arrived at Zimbabwe Open University in a blue-and-yellow gown, accompanied by his security detail, in his first public appearance since he was detained in Wednesday's army takeover.

Mugabe's appearance was apparently designed to convey a business-as-usual atmosphere.

But behind the scenes, Mugabe has pushed back on a deal to replace him with an interim leader, arguing there would be a constitutional crisis if he left before his term expired, according to a government source with direct knowledge of the talks.

Frustrated with his resistance, the commander of the defense forces said he had until Friday to change his stance, "or we do it the hard way," a source said.

The political firestorm was ignited by Mugabe's dismissal of his powerful vice president, Emmerson Mnangagwa, who has strong connections and the support of the military.

Under the deal apparently on the table with Mugabe, Mnangagwa would run for the leadership of the ruling party at a congress in December, allowing him to run in next year's presidential elections.

Mnangagwa was instrumental in plans to seize control from Mugabe, who was planning to anoint his wife Grace as his successor.

Mnangagwa's whereabouts are unknown, but he was widely reported to be guiding events. The influential Zimbabwe National Liberation War Veterans Association, which has thrown its support behind Mnangagwa, is planning a huge show of strength in Harare on Saturday.

"There is no going back about Mugabe, he must leave," said Chris Mutsvangwa, head of the association.

Foreign powers have called on the military to show restraint in the upheaval, but have largely supported its actions so far.

US Secretary of State Rex Tillerson described the situation in Zimbabwe as an opportunity for the country.

"Zimbabwe has an opportunity to set itself on a new path, one that must include democratic elections and respect for human rights," he said at an event in Washington, calling for a quick return to civilian rule.