Zimmer Cutting up to 100 Jobs 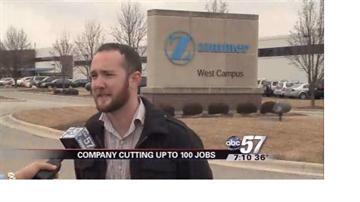 Warsaw, Indiana- Nearly 100  employees came to work only to find out they might not have a job in six months.

Zimmer, a company that touts itself as a global leader in orthopedic implant technologies, is relocating one of its branches from Warsaw to Memphis, Tennessee.

The announcement started a chain reaction through Zimmer's employement base in Warsaw.

Some of the impacted employees are going to have to hope they qualify for other jobs within the company, others will have to find work somewhere else.

We talked to one man who had no clue that the company he worked for 22 years was closing its distribution center.

"It just wouldn't eb that easy to get another position in the orthopedic line" said Roger Middleton.

Rogers niece and nephew work for Zimmer in the center that is closing. They have six months to find another job before the company moves the work done there to Memphis, Tennessee.

"I just hope it works out for them" said Middleton.

Zimmer says the move will allow the company to provide faster deliveries throughout the country. It also plans to keep its final inspection, transportation management, and costumer services in Warsaw.

"The national transport hub in Memphis, Tennessee allows us to have same day shipping and last minute surgery scheduling for the west coast which we have not been able to process" says Zimmer Director of Public Relations Gary Clark.

Nearly 100 full-time employees at Zimmer are now looking for work, and the president of the Warsaw Chamber of Commerce says the city had it coming.

"I think it is a wake up call to our community that we have to address the challenges we have" said Mark Dobson.

According to Dobson the biggest problem is the transportation fo products. He says if they don't find a solution soon, more jobs may be outsourced to other communities.

M"If a business model can be created that the products manufactured here can be shipped elsewhere cheaper, then we have to address it or shame on us for not trying" said Dobson.

A spokesman for Zimmer says they company has no plans to move any of its other departments.