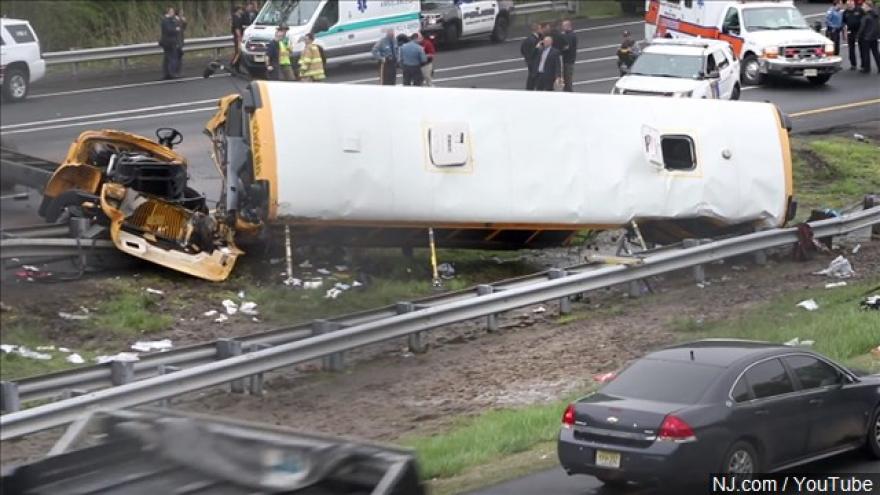 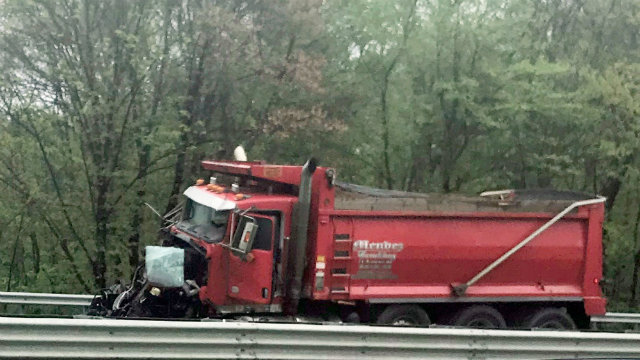 A school bus and a dump truck were involved in a serious accident Thursday morning in Mount Olive Township in Morris County, New Jersey, according to the township's mayor and a verified tweet from New Jersey State Police. Jay Faltings via AP

By Ray Sanchez and Sonia Moghe

(CNN) -- A teacher and student on a field trip were killed Thursday when a school bus collided with a dump truck and flipped over in Mount Olive Township in New Jersey, Gov. Phil Murphy said.

More than 40 others were injured, some critically, and were taken to local hospitals, Murphy told reporters. The truck driver was also being treated at a hospital.

The names of the teacher and student killed in the Interstate 80 crash were not released.

"It's a tough day here in Paramus," Bergen County Executive Jim Tedesco told reporters. "Sixty-five years I've lived in this town and it's difficult to stand here today to talk about our education community suffering so deeply."

Mount Olive Mayor Rob Greenbaum, who saw the aftermath of the highway crash from an overpass, described the scene as "horrific." He told HLN on Thursday there were possible ejections from the bus during the crash.

The bus was transporting 38 fifth graders and seven adults from East Brook Middle School in Paramus, New Jersey, official said. Forty-three of them were injured.

Two other buses from the same school were also on the trip to Waterloo Village, a restored 19th-century canal town on the Musconetcong River. The buses returned to the school after the crash.

"Everyone's trying to make sense of this," Murphy said after meeting with teachers.

Theo Ancevski, 11, told CNN affiliate WCBS-TV he was sitting in the fourth row when the bus crashed. Students screamed and some were left "hanging from their seat belts," he said.

"I heard a scraping sound and we toppled over the highway," he told the station outside a hospital. "So then a few people got out of the windows and they got out of the emergency exit on the top, on the roof."

Jay Faltings, who drove past the scene about five minutes after the crash, told HLN he saw children being rescued from the wreckage.

Faltings said the front of the dump truck appeared to have been sheared off and the school bus was "ripped off its frame" after hitting a guardrail and flipping over.

"It's like nothing you've ever seen before," he said.

"They were young kids," he said. "But luckily, first responders, everybody there helped get all the kids out safely from what we could see. ... The kids were obviously freaked out."

"As somebody who has been a first responder for over 40 years, these are not the type of incidents you want to have to respond to," he said.

"But it was their work, their effort that helped save some of these students."

The cause of the accident is being investigated by the New Jersey State Police and the Morris County prosecutor's office.

Murphy and other officials would not provide any additional information.

The National Transportation Safety Board said via Twitter that it was "gathering information" on the crash.

East Brook Middle School will be open on Friday, with counselors available for students, officials said. All field trips have been canceled for the rest of the school year.