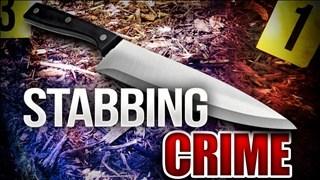 (CNN) -- One man was killed and three people injured in a knife attack at a train station in southern Germany Tuesday morning, the Bavarian Criminal Office said.

Police have arrested a 27-year-old German man in connection with the attack, a police spokesman said, adding that a political motive could not be ruled out.

The dead man, a 50-year-old, was inside a train bound for Munich when he was stabbed, police said. He later died at a hospital.

Three other men were injured, one of them seriously. Officials gave the injured men's ages as 58, 55 and 43.

Police arrested the suspect near the station shortly after the attacks, said a police spokesman. A knife with a 10-centimeter (4-inch) blade was recovered, he said.

The scene of the attack was cordoned off as police carried out inquiries, but the station has since reopened.

Footage from the scene showed bloodied footprints leading out of a train carriage at the station, and small puddles of blood on the platform.

The Bavarian Criminal Office is leading the investigation.

CNN's Damien Ward and Nadine Schmidt contributed to this report.