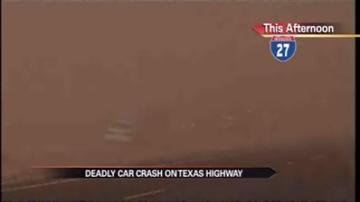 LUBBOCK, Texas. -- At least one person is dead after a dust storm caused a multi-vehicle pileup on a Texas highway.

The accident happened Wednesday afternoon near Lubbock on a stretch of I-27.

Authorities say an unknown number of cars crashed into each other in near zero-visibility conditions.

Emergency crews are having trouble getting to vehicles because of the storm. They even called in a mass casualty bus to transport dozens of victims to a nearby hospital.

The wreckage shut down the highway in both directions between four exits for several hours.