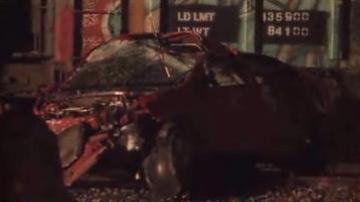 ST. JOE COUNTY, Ind. – One man is dead after his car his hit by a train near Walkerton.

It happened just before 2 a.m. Thursday near the intersection of Roosevelt Road and Industrial Park.

According to police, 64-year-old David Hollinger of Starke County was heading southbound and illegally went around the “road closed” barricades and tried to cross railroad tracks that are under construction.

Hollinger made it across the first set of tracks, but got hung up between the two rails.

Police are not sure how long he was stuck. The train was going about 50 mph. The conductor tried to stop but slammed into the vehicle. Hollinger was killed on impact.

The conductor was not injured. Police said there was no indication of alcohol or drugs. The victim was trasnported to St. Joe Medical Center and an autopsy is scheduled.