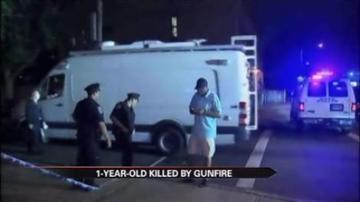 BROOKLYN, N.Y. -- A one-year-old boy is the latest victim of gun violence in Brooklyn.

Officers say the boy's parents were pushing him in a stroller while crossing the street around 7:30 p.m. Sunday when he was hit by a stray bullet.

That bullet hit him in the head.

The boy was rushed to a nearby hospital where he later died.

"A father was visiting his child. He was spending time with his kid. Apparently, a person that had a beef with his brother saw him, and decided that that was the perfect opportunity to shoot at him, which was not because the one-year-old was hit in the melee," said Community Advocate Tony Herbert.

No arrests have been made in connection to the shooting.