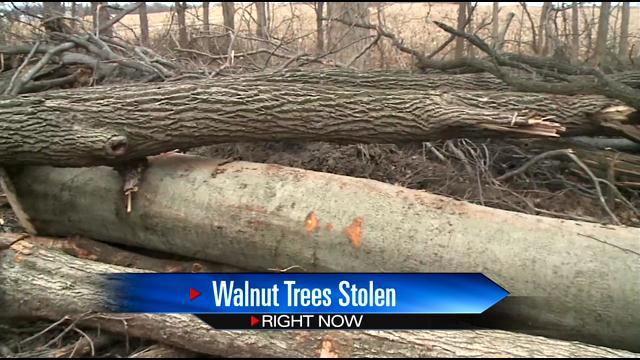 Two trees worth about $10,000 were stolen from property owned by the Pike Lumber Company in Pokagon Township. The company is putting out a $10,000 reward for anyone who leads police to an arrest and conviction.

The Cass County Sheriff's department is investigating and management believes the incident happened between 1:30 p.m. Tuesday December 9 and about 9 a.m. Wednesday December 10.

Chris Baker has worked in the woods on Beeson Road for three decades. Baker said they hauled off one tree that was already cut up into logs.

Baker said, “The other tree that was already harvested was laying back up in that long lane there. And we were going to be hauling that log out of here mid-week last week.”

To cut down the second tree, Baker said it looks like the thieves threw a rock through the side window of their front end loader, used a screw driver to start the engine, and then used it to load up the logs into a trailer. He said the damage is estimated at $1,000.

Baker said, "Well you can see the broken glass here by the stump and because this was over 50 feet long, it was too long to load on their trailer so they had to cut it into log lengths. So the evidence of where they used the chainsaw is in the grass.”

Baker said, "At least 80 to 110 years old plus or minus. It was probably 110 feet tall. Approximately 50 feet of linear log was removed and it had significant high value.”

If you have a tip you can call Michiana Crime Stoppers or the Cass County Sheriff's Department.