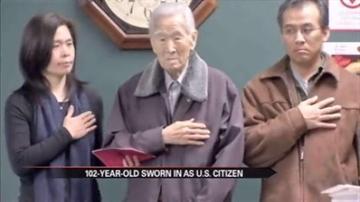 PHILADELPHIA -- The New Year is starting off with 67 new American citizens in the Philadelphia area. People from 36 different countries were sworn in at a Naturalization Ceremony, including a 102-year-old-man.

Yun Chang moved from Korea ten years ago to join his family and his son-in-law is proud to call him an American.

At 102 years old, Chang is not the oldest to become naturalized. Officials said there has been people as old as 117-years-old that became citizens.