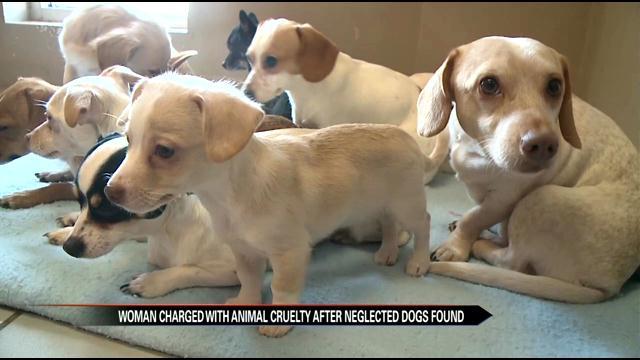 The Humane Society of Southwestern Michigan rescued 10 dogs and 1 puppy from a kill-shelter on Friday.

Jill Svoboda said, “They are ‘Chih-weenies'! Which is half Chihuahua, half dachshund, they have very long bodies and more Chihuahua type of faces!”

According to the VanBuren County Sheriff's Department 56-year-old Nina Sparks from Lawton, Michigan was charged on Thursday with abandonment/animal cruelty.

Sparks was also charged as a habitual offender. Police said the dogs were left in a small apartment without food and water.

Svoboda said, “The tenant got evicted, and she left all 11 behind, so then they called us!”

On Friday the Humane Society of Southwestern Michigan picked these guys up from animal control in Van Buren County.

Svoboda said this is not the first time this has happened. They actually rescued 20 Chihuahuas from the same animal control a year ago.

Due to this unexpected influx of dogs, they are in desperate need of donations to help pay for food and vaccinations.

The dogs appear to be in good health but they are waiting for the dogs to get settled before they run more tests.

Svoboda said, “It will probably be a good three weeks before they are all medicated, treated, and ready for adoption!”

You can drop off donations at the humane society's location or donate to the "Tiny Eleven" here: http://www.firstgiving.com/fundraiser/jillsvoboda/tinyeleven
Share this article: