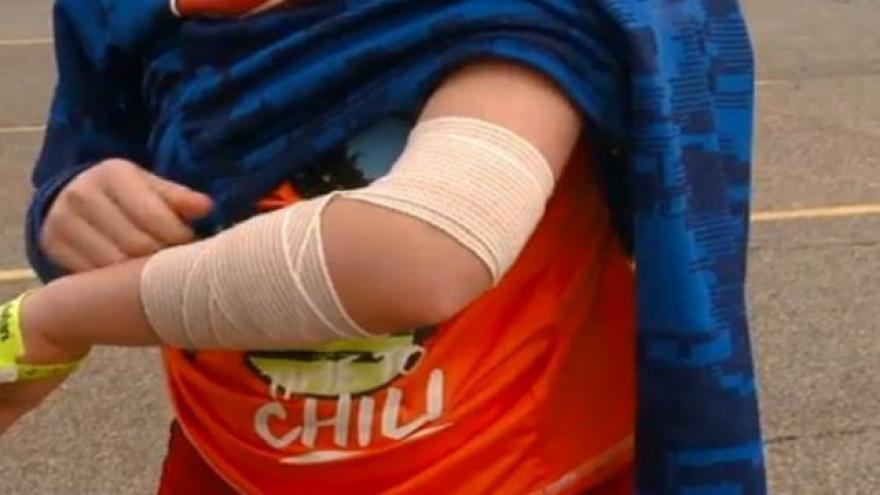 Alan Derry tells a frightening story after hundreds of pounds of ventilation fell from the ceiling of the popular Kalahari Resort. Photo courtesy WJW

Chardon, Ohio (WJW) -- A 12-year old boy tells a frightening story after hundreds of pounds of ventilation fell from the ceiling of the popular Kalahari Resort.

He was one of five people injured when duct work fell into a pool at Kalahari.

Derry says he was in the pool at the Kalahari Resort in Sandusky Monday afternoon when a huge piece of duct work came crashing down.

"They fell, like the clips broke and it fell and hit me in the arm…it shocked me because it made like a big boom. It scared me, but there was a 40, 45-year-old guy pushed me out of the way, so they wouldn't get hit."

Alan, who is from Chardon, says some debris hit his arm. He says paramedics patched him up in Sandusky, but his mother took him to Hillcrest Hospital as a precaution to get checked out.

The Erie County Sheriff's Office says five people, including Alan, were hurt when the ventilation duct work fell around one p.m.

"There was a lifeguard that was like, his head was bleeding and one lifeguard was like knocked out," said Derry.

Alan's 13-year-old sister, who did not want to be identified, watched the accident happen along with some of their friends.

"I heard like a scrapping noise, so I turned around because our table was like right next to the pool that it fell into. And when I turned around I saw something falling and then it made like a big boom noise. And then people started running and like screaming and then everybody started crowding the pool to see what happened,” said his sister.

Kalahari released a statement saying they take safety very seriously and are "working closely with our internal teams and proper authorities to gather details on what happened and will share an updated statement when we have confirmed all the facts."

Alan says it was his first visit to Kalahari, but it won't stop him from going again.

"It was just a bad incident that happened," he said.

The park is closed while investigators look into the accident.